An ongoing topic of discussion in fishing circles, at least around the south-eastern Australian region, is the trout vs natives debate. It’s been raging for years — some might even say centuries — so we thought it about time to chip in and throw the proverbial two cents into the fray. Trout aficionados, with whom we often empathise via a controversial affection with these undoubtedly beautiful salmonids, are pretty rusted on when it comes to the debate. And it’s largely understandable: there is no denying that trout are a fantastic angling fish, and it’s not difficult to see why thousands upon thousands of pages have been dedicated to the pursuit of such worthy quarry.

Trout and fly fishing are a match made in heaven.

Natives anglers are similarly rusted on, and for good reason. We have some of the most beautiful, hard fighting native fish in the world. Anyone who has experienced the gunshot-like crack of a cod hitting a surface lure would be mad not to have fallen head-over-heels in love with these awesome fish. The rusted-on natives anglers are arguably even more rabid than the trout afficionados; perhaps something to do with the fact that many of our top end native predators have copped such a beating over the years.

Where would I need to go to catch a trout this big that smashes a 200mm surface lure?

If trout anglers and natives anglers can get their fix, then what’s the big deal? Why is there so much animosity between proponents of one or the other, and why can’t we find a solution to the problem?

The answer lies in what is called the human factor. You might have heard of it. It’s a thing that happens when people know they are right. And of course people will fight for something when they know it is right, regardless of whether other people might have different values and if they think they also know what is right.

So why do we still have closed seasons for trout in certain rivers that hold ‘healthy’ populations of natives? A perfect example is the Cotter River in the ACT. The Cotter is a stronghold for Macquarie perch, trout cod and two-spined blackfish, and it’s also filthy with trout. Yet trout are afforded their usual protection via a seasonal closure from June to October every year, as well as the usual bag, size and gear limits or restrictions.

This makes absolutely no sense.

Future generations will look back on this and think ‘what the bloody hell were those damn dinosaurs thinking?’. And rightly so. I don’t think I need to make it more explicit but here goes: we have rivers with remnant populations of threatened natives in which introduced trout are protected to comply with blanket, outtdated rules conceived by rich, old, white men to protect their beloved trout. There. I said it. You heard it here first. 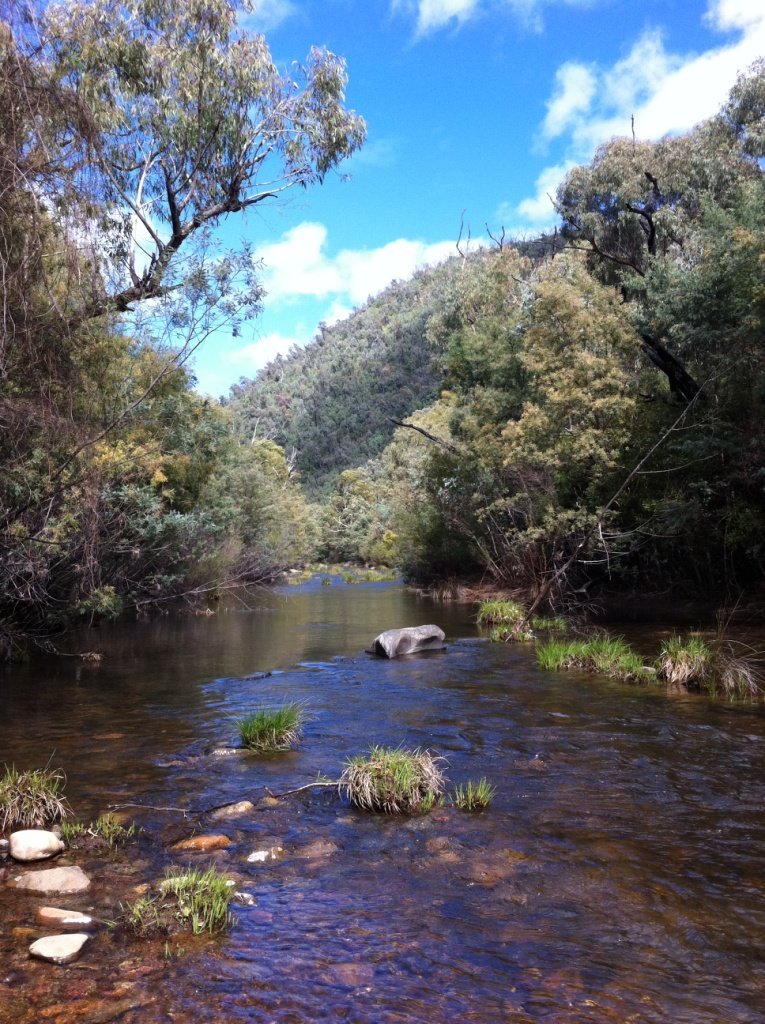 The beautiful cotter river: The dense vegetation makes it much easier to be in the river, rather than fight along the banks

Apart from black and white ‘natives are better than trout’ (and vice versa) arguments, one of the key considerations in this debate is our changing climate. The evidence is unequivocal, and we’re not going to go into any arguments or debates about whether or not this is happening. Yep, we drink XXXX gold and some of us like pig doggin’, but CLIMATE CHANGE IS A THING. IT IS REAL. IT IS HAPPENING, and we need to think about how to deal with it. The climate trends and forecasts for south-eastern Australia are quite interesting; less reliable winter and spring rainfall, lower average annual rainfall, more extreme summer storms and warmer minimum and maximum temperatures. All of these variables have an impact on fish, whether it’s their thermal preference or tolerance, when environmental cues tell them to spawn or go into low-energy modes, when to feed and so on.

Trying to stay as objective as possible, it’s likely that the climate-related availability of preferable habitat for both trout and ‘upland’ natives will decrease over the next few decades, as is has been since around the 1970s. It will no longer make sense to stock fish with a preference for low water temperatures in lowland and mid-altitude systems. So how do we prioritise the upland fisheries? Some might argue that we should stop stocking trout altogether, but this would have massive social and economic impacts and probably isn’t a realistic proposal. What we potentially need is some sort of plan—call it a straw person—to map out the next 20 or 30 years of inland fisheries management. It might not contain ideas that are palatable to everyone, but solving complex problems usually requires compromise. I can envision productive native and trout fisheries in south-eastern Australia that are accepted and cherished, where anglers respect the wishes of their counterparts who prefer one or another. At the moment though, the politics does seem a little skewed towards trout. This isn’t really anyone’s fault – it’s more of a cultural, political and economic hangover.

I suppose the important thing to get the balance back is already happening in front of us; lots of rusted on ‘middle aged’ fishers (like myself) are watching the young guns learning how to exploit and enjoy our natives fisheries, and it’s a pretty picture. We have dudes out there sight fishing for cod using flies; we have blokes making surface lures that immitate water dragons; we have freaks consistently catching metre plus cod in local impoundments. It’s an exciting time to be a natives advocate, and there is a real groundswell of support and reverence for these awesome fish.

So I guess the message is that if you’re a natives advocate, keep doing what you’re doing. The real crux of it is how people feel about the different species, and the more people out there learning how to catch natives, and realising how awesome they are, the better. I still love trout, but they are becoming more of a novelty for me as I grow to see them more as the invasive predators that they are. I think foxes, cats and pigs are amazing animals and I get immense enjoyment out of hunting them, but I still shoot them.

I hope this article hasn’t ruffled too many scales. Reading it myself, it’s obviously skewed towards natives, because I know I’m right on this one. Maybe future generations will read this article, and hopefully I’m on the right side of history.