Graz and I recently spent a few days fishing the Murrumbidgee west of Narrandera. It was a great chance to catch up with Grazza, who has spent the last year on the sunny shores and tropical mountains of Hawaii. We arrived fairly late after a decent 3.5 hour drive from Canberra. We only had a few km of dirt roads to get to the campsite but some rain earlier in the day had made the soil out there like thick sticky goo. We unsuccessfully navigated the rutted roads, with the boat in tow, meaning that we basically drove into every single rut possible and couldn’t escape until it ended. Luckily we arrived at the campsite in one piece, boat-trailer axle and all. It was late, but we were excited and built a nice campfire with the abundant red gum timber and proceeded to drink beer and discuss how many fish we were going to catch. I think we hit the hay around 1am, with the alarms set for 5.40am.

I woke up at about 5, feeling halfway between a kid on Christmas eve and an old person who had too much to drink the night before. Not too phased, I dragged myself out of bed into the chilly darkness of morning and put on a pot of coffee. Graz didn’t take long to surface and we discussed whether to put the boat in or fish land-based. We decided on the latter, as we didn’t want to be faffing about too much during the prime time of first light and sunrise. The land-based fishing was a bit tough, with no action to show for our efforts. After a quick snack and more coffee, we went to figure out where to put the boat in. We finally made it to the ramp, which looked nice and solid. Looks can be deceiving.

After about 20 minutes of wrestling the boat and the Hilux we finally had the boat in the water. Surely getting it out wouldn’t be so hard, but we didn’t really care at that point (in the end, it was fine). We were on the water and fishing! A few guys at the ramp had just caught a nice little cod and a yellowbelly, so we were feeling optimistic that we’d catch a few fish. A big thanks to the blokes from Griffith Souths Fishing Club (?) who helped to get the boat in the water, as well as providing lots of good advice. We found a few rods left on the bank once you’d left, so if they are yours and you want them back send us an email! We didn’t need to go too far from the ramp to find a bit of action. I cast a little spinnerbait over a tree, gave it one wind, and a little cod shot out and nailed the spinnerbait. Success!

The fishing was pretty slow on day one, with one other fish landed off a deep snag. In fact, the fishing was tough for the whole trip! We only landed 5 cod altogether, with a nice carp on spinnerbait thrown in for a bit of excitement then disappointment. We fished fast and slow, all sorts of different structure, even tried trolling, but the cod didn’t really want to play ball. In hindsight, we were probably fishing water that had been thrashed over Easter, and we probably should have gone further afield to find a few fish that hadn’t recently had countless spinnerbaits swim past their noses. Hindsight can be a real pain in the backside.

Late on day two and the electric motor started to die, and sadly, never recovered despite Grazza’s efforts late on night 2. WD-40 fixes everything, we said. Well it didn’t fix this. It made me realise how hard it is to fish water like this using lures without a good, working electric motor. Sometimes we take it for granted, and I reckon people who consistently catch fish without all the new technology are leagues ahead in terms of skill and persistence than many of us who have become reliant on it.

We started fishing with the current, meaning we were basically drifting down river and ‘powerfishing’, meaning we had one or two casts at each spot before we were on the next snag. Graz had given up on the sub-surface lures and tied on a nice black jointed cod whalloper, a favourite amongst local fishing circles. I watched as he made a perfect cast onto a nice snag entering the water at a 45 degree angle. He let the lure sit for a few seconds before giving it a seductive twitch. BOOF! A nice little cod inhaled the lure, and was soon in the net.

We eventually headed back to camp for more beers, lamb and laughs.

We landed one fish on that third morning. With the electric well and truly on its last legs, we decided to troll, and within about 2 minutes a nice little cod found its way to the boat. We had cracked it! Sadly, that wasn’t the case, and we didn’t get any other hits. The one thing that stuck with me was Grazza’s antics. As soon as I’d landed the fish, Graz pulled out a banana and started laughing. I have had a banana superstition for years, and am convinced that you never catch fish when there is a banana on board (also, see this post and this post for more on bananas). Well, I was clearly wrong according to Graz, but we only caught one fish, so if there wasn’t a banana on board I reckon we would have caught 10.

It was a great weekend out west with a great mate. Can’t wait to do it again. It was great to fish a different environment with different wildlife, vegetation and dynamics. I’m sure fishing different places makes you a better angler, as it forces you to think carefully about a ‘new’ system and how to catch fish in it. I feel as though we did everything right to catch fish there, but the lesson for me was to try to find a bit of water that hasn’t been thrashed. This lesson should be #1 in the Cod 101 lesson book.

Hope you enjoyed the photos, and thanks for reading. 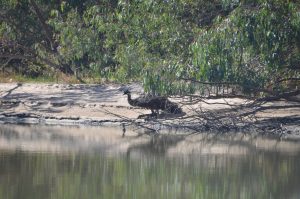 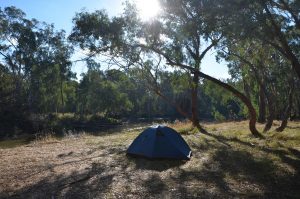 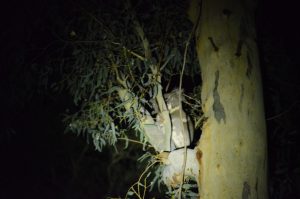 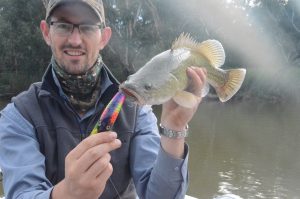 3 thoughts on “A few days fishing on the Murrumbidgee”