Another in the ‘How to and Q&A series’.

Killing bream and snapper is arguably more difficult than some of our more ‘streamlined’ species. Instead of simply knocking them on the head, cutting the throat or severing the spinal cord, bream and snapper are best killed by spiking. Spiking might seem daunting at first, and you might have the unpleasant experience of ‘missing’ a few. But in the longer term, you will have killed a lot more fish far more humanely than if you were to continue using most other techniques, and they will taste a lot better for it. You can also sleep easy at night, hopefully with a full belly of fish.

Here’s the breakdown. Bream and snapper have a small soft patch of flesh behind and above the eye*. 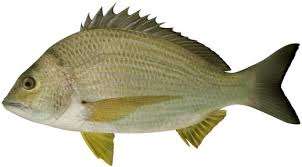 On the photo above, the ‘sweet’ spot is approximately between the eye and the small darker patch in line with the gill plate. A sharp spike, which can be made from an old screwdriver or tent peg, should be inserted at an angle towards the eye. When you hit the spot, the fish’s fins will stand up on end and the fish will go completely limp.

Now, something to remember is that the heart is still beating. It’s definitely dead, but if you have a particularly large fish (i.e. a larger snapper) or one that you want to use for sashimi, it pays to bleed the fish. This can be done by simply cutting the ‘throat’, which is where the bottom of the gill plate meets the main body of the fish. A small cut about an inch deep will sever the artery and the fish will bleed out. Don’t cut too deep, as you may pierce the heart or the gills and the bleeding process won’t be as effective.

I hope this has helped. Like I said, learn to spike properly and you can have a clear conscience about your dinner. Also, fish killed promptly don’t release the same volume of stress hormones as fish that you fuck around with, so it’s humane and they will taste much better.

*Ah the asterisk. Most fish also have a small ‘cheek’ of flesh behind and slightly below the eye. In my opinion, this is the most delicate, delicious bit of meat on most fish. If you haven’t dug around and extracted a cheek from a baked or fried fish, do it. You’ll never look back!