As time faded away from me at my housemates going away party, I started to get a little anxious about whether I would actually wake up to my alarm at 415 the next morning, which was only 5 hours away. It had already been a pretty hectic weekend. A dinner party on Friday with friends we hadn’t seen for a while which ended up with all of us quite drunk on Smith st well past midnight. Breakfast the next day, sorry I mean “brunch” at 9 with my girlfriends family feeling a little seedy and now my housemates going away party. I decided, despite it being bad form to sneak off to bed, so I was at least conscious the next morning and didn’t get the “hey man you were supposed to pick me up 15 minutes ago” phone call while still in bed (this has happened twice before in similar circumstances, it doesn’t make for happy fishing buddies)…

The alarm started making screeching noises and buzzing a little too soon after I got to sleep, I groggily got up, put on some coffee, took the dog out, got dressed, hastily organised my fishing gear, couldn’t find any shoes, so grabbed some thongs and headed out the door. I picked Nick up right on time and we started heading out of Melbourne, picking up Vaughan, a first time fly fisher who had done what so many others do the night before exclaiming he’d always wanted to go fly fishing but unlike most actually following through with his excitement when informed about the early start the next morning…

We arrived at the river we planned to fish, which is about two hours out of Melbourne, at around 730, set up the gear and started fishing. Nick had been out there a few days earlier and it was going off, fish smashing dries every two or three casts for most of the day… At first it looked like it was going to be a pretty good day. I had landed my first fish, a small healthy bow in the first pool I fished and missed another in the same spot on the next cast after getting a little distracted watching the fish rise from the bottom of the stream, accelerate towards my fly and smash it. In my slightly sleep deprived state, I forgot to actually strike. In the next hour or so I managed to land another healthy rainbow and drop a decent sized fish and Nick landed a nice little brown of about 30 cm and dropped a few more. Vaughan was fishless… When we all caught up soon afterwards, we decided to do a little bit of exploring and head to a spot none of us had been too before.

We arrived at our new spot and the water looked fantastic. It was a larger river than the one we had been fishing, deeper and in general “bigger fish territory”. We set about fishing. Over the next four hours, we failed to land a fish. Nick got closest, a monster trout came up from the depths of its deep pool to investigate his fly, the bow wave was the first thing we noticed, then its broad back. Then, as it arrived, it promptly turned, its tail flicked out of the water and back down it went. When Nick pulled in his fly, why it had turned away became immediately apparent. His fly, a little royal wulff, was encased in a birds nest constructed with what had formally been his leader. Other than that, I spooked one decent fish and that was it. The spot has huge amounts of potential and deserves another visit, but sadly it didn’t produce on this day. Next time.

Searching our brains about what to do next we decided it was time to get twiggy and fish a tiny stream. Its one of those streams where “wading” it, requires more climbing than actual time in the water because of all the trees and logs that criss cross it. On the plus side, it is chocked to the brim with little trout. Given the area where the stream is is quite heavily fished, the log jams, which make fishing the stream incredibly hard (and fun), probably contribute to the sheer number of trout it contains. When we arrived, I had a cast off the bridge. There are two very reasonable trout that live in the hole under the bridge. A 40cm plus brown and a 30cm plus rainbow. First cast, I caught a much smaller little brown, that smashed my stimulator pattern a second or so after it touched down on the water surface. A quick photo and we headed off up and down the creek. I went up where access is a little harder, its a little shrubbier and with a few more log jams, Vaughan and Nick went downstream where access is a little bit easier, especially for a beginner. Vaughan was being thrust into the deep end if he was going to catch a fish… 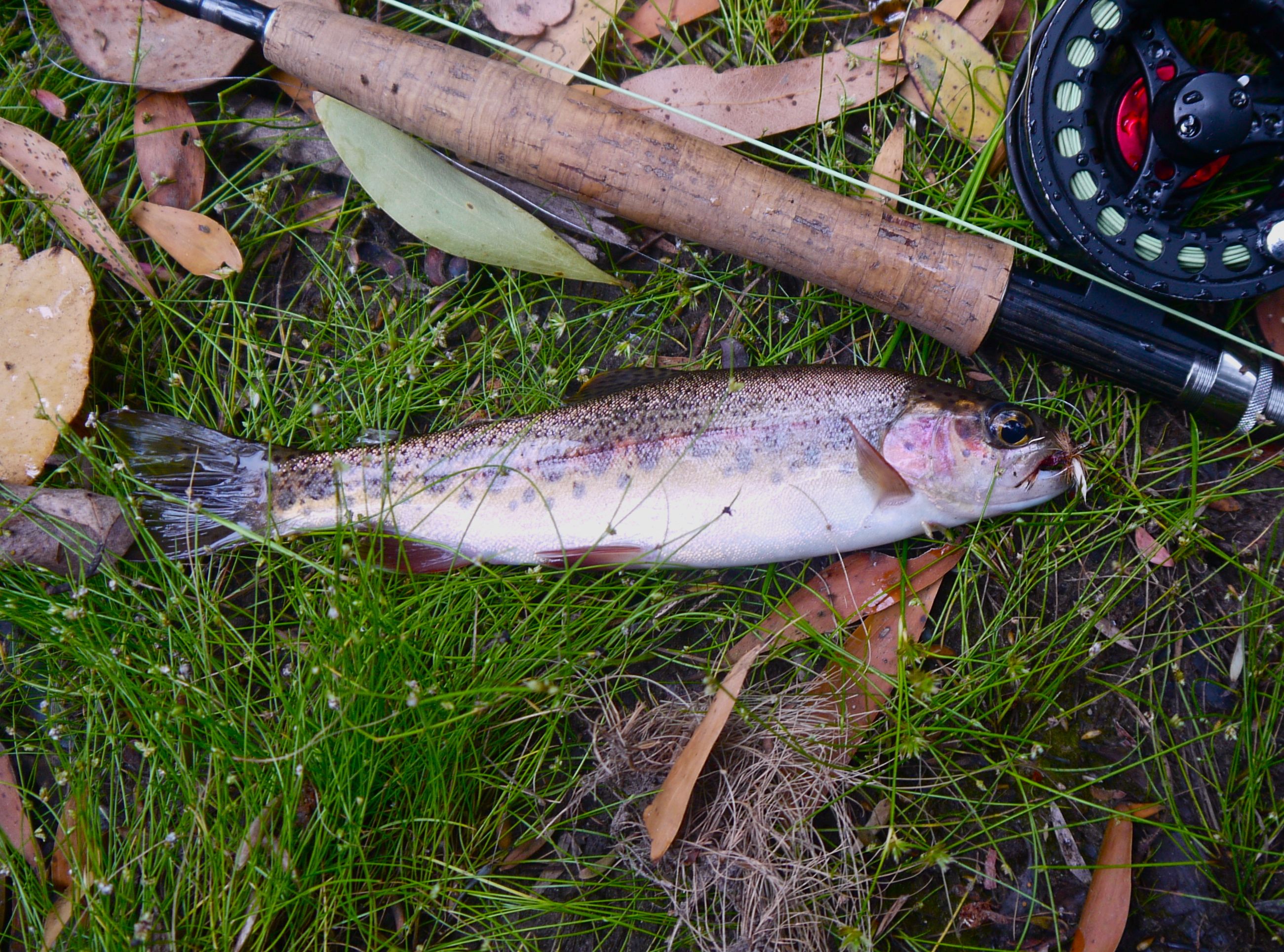 My upstream session was a lot of fun. Bow and arrow casts were the order of the day and to present flies to fish without spooking them you often had to cast over logs and structures from weird positions. This provided some light entertainment in itself. At one point crouched under a big log crossing the stream, rod under another log just in front, I bow and arrowed my fly over another log (there were lots of logs). Upon touching down, a little fish slammed it almost instantly, before I was set to try and strip strike my drifting dry (lifting the rod wasn’t an option, due to the log it was under). A second or so later another little fish had a go, but I missed it. Fish were dropped as they hung from logs as I tried to scramble over other logs to get the fish to hand, which would have been a funny sight if there had been anyone to see it. I took a good tumble when a log I was standing on turned out to be rotten and gave way. I inelegantly landed in 2-3 inches of water and spooked the decent trout I was stalking trying to find a position where I could present a fly to it. Little 2 inch fish would routinely come up and nip at the tail of the fly. While most fish were small I saw a handful of decent fish over 30 cm, with one most likely in the 40s. Its quite amazing such “big” fish inhabit such small waters. I literally spooked hundreds of fish as I wandered up the stream. A lot in places that it was simply impossible for someone of my skill to present a fly to. When I could present a fly to a likely spot without spooking the residents, the fly was invariably smashed almost immediately. My hook up rate was abysmal though. The technical cramped positions you had to be in to present flies to where you wanted contributing to that. In the end, I got another four bonsai trout to hand and dropped another three or four in the action packed hour I waded and awkwardly clambered over logs. I probably missed another 15 strikes. It didn’t matter though, the scenery was exquisite and the show these little trout were putting on was enough to make any man content. 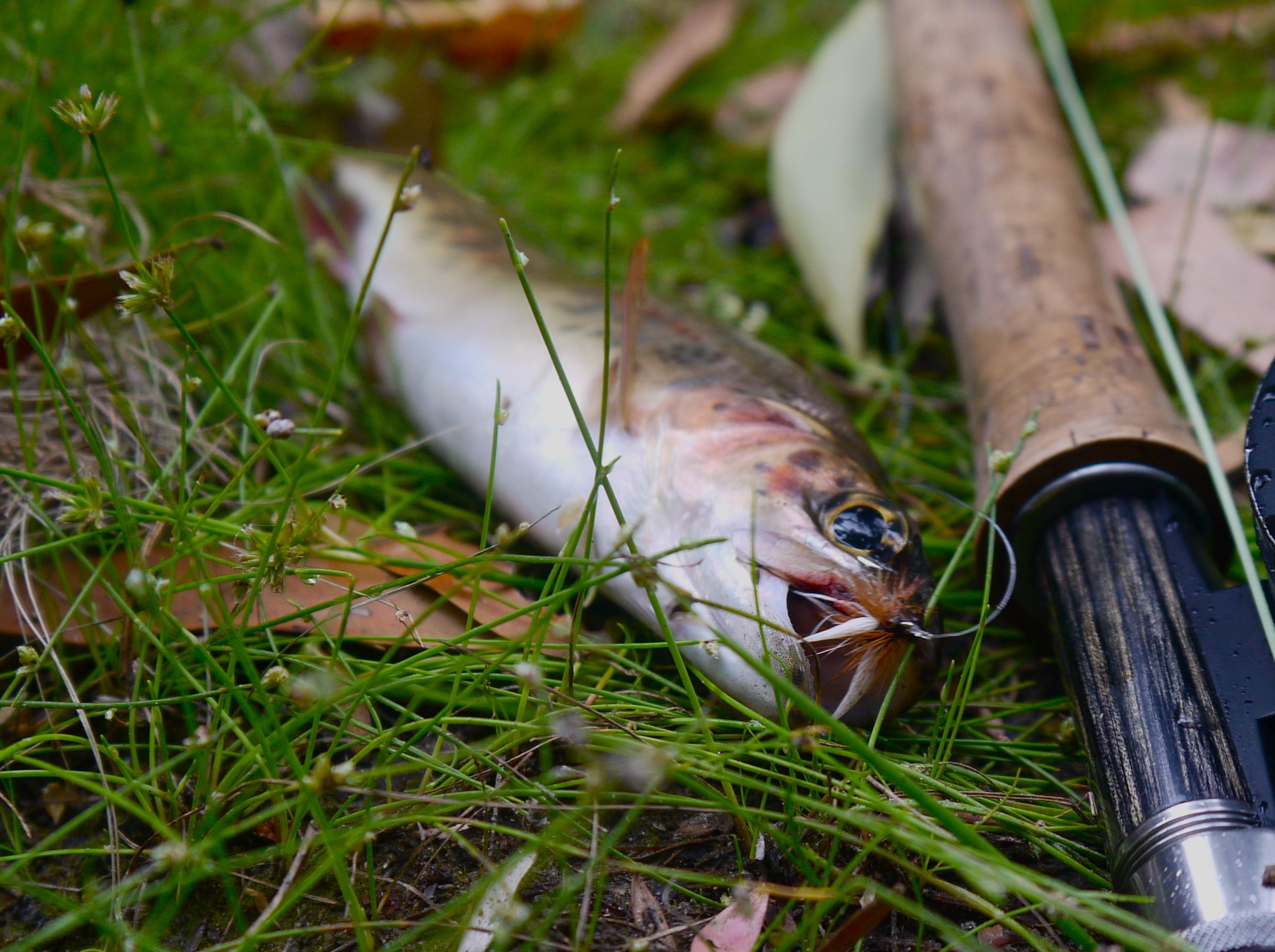 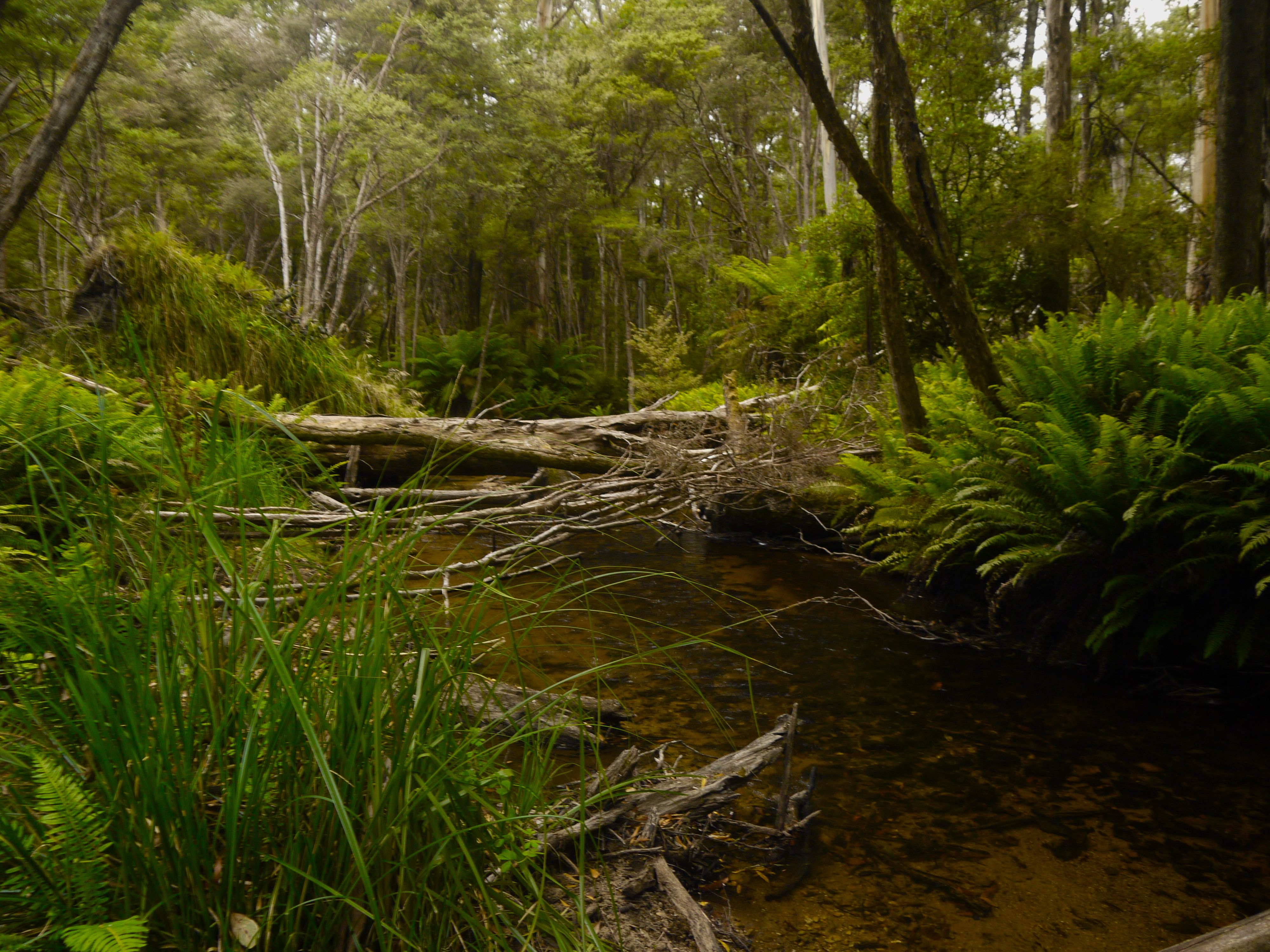 Vaughan and Nick, who had headed off downstream didn’t fare quite as well. Nick got another little one, but it was Vaughan who took the cake. Fishing water that its almost unfair to put a first day fly fisher into, he stalked and perfectly presented a fly to the biggest fish of the day. A skinny 35 cm brown. Sadly, I was’t there to witness his conquest and neither of them had a camera, but it was great that after what had been a hard day, he had finally managed to land a fish.

After our fun twigging session we proceeded to start driving home, stopping off at a few little rivers we hadn’t fished to scout them out for future trips. Vaughan asked questions about which fly rod to get (I think he is hooked) and which streams to fish. Living in the area, he was hankering to get started making the most of it. As I walked in the door at home, exhausted, I saw my girlfriend manning the BBQ, I had timed my return home perfectly. I opened a beer, ate dinner and headed off to watch trashy telly before quickly falling asleep. A great day over and the deep deep sleep than comes from pure exhaustion.