Well, I’ve just returned to Melbourne from the Rockhamton area. Returning to Melbournes dreary weather after four days of warmth and sun is tough to say the least. I was up in sunny Queensland for a wedding and not to go fishing, so only got in a few little sessions. The wedding as held on a farmstay just out of Rocky where the fishing options were limited by wedding festivities. The wedding was great by the way, I rocked a short suit, got myself in a dance off with a professional dancer (I almost held my own, but once the big guns were brought out lost very convincingly- my dancing skills cant compete with jumping into the splits), got a little merry and generally had a blast… After the wedding, the bride and groom and 40 of the guest including myself went on a grout honeymoon to Great Keppel Island for a few days… 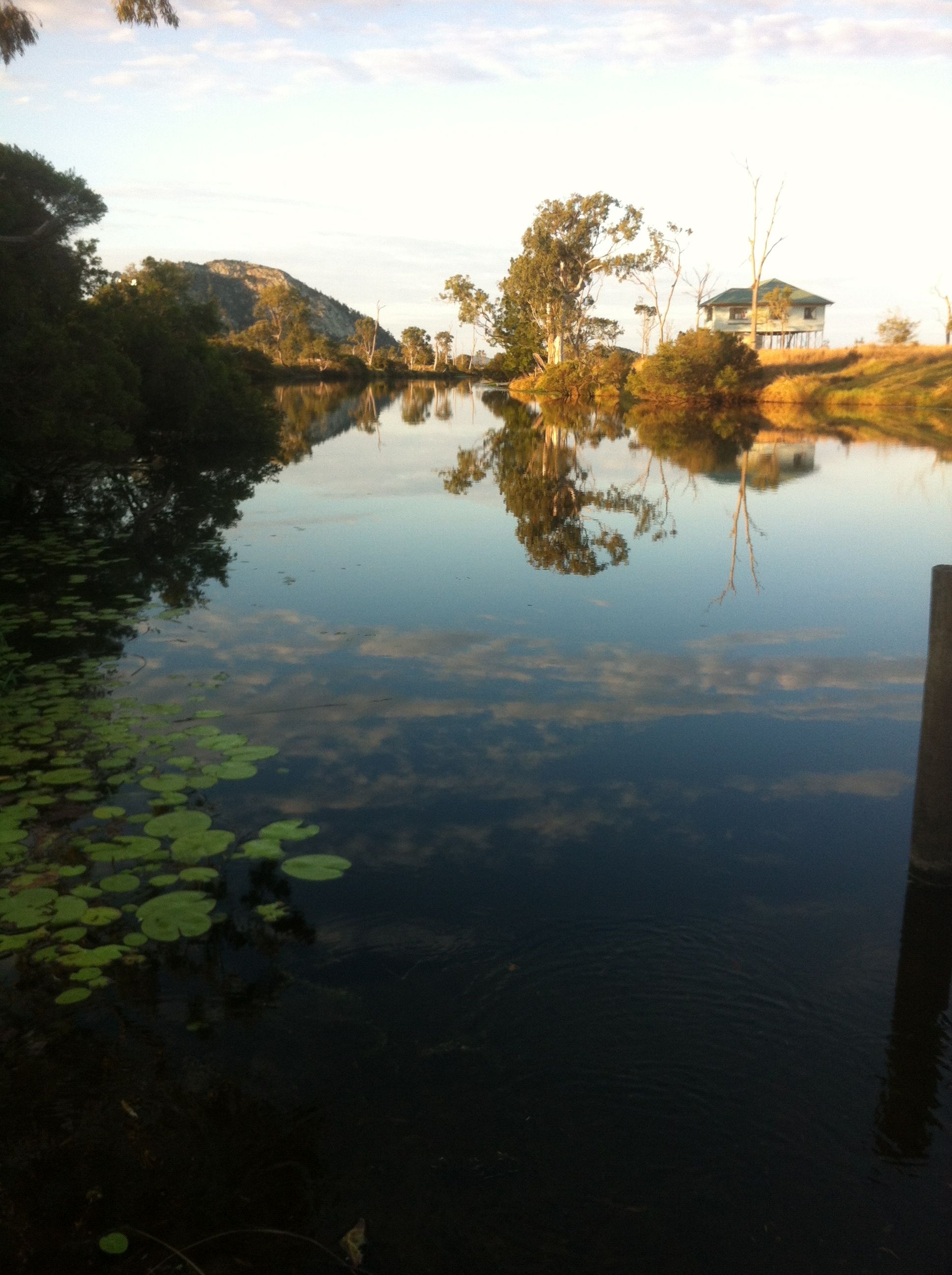 Billabong at the farmstay

Great Keppel, once famed for its resort which shut down i 2008 is a pretty wonderful place… Great beaches, walks, snorkelling and all the other things you would expect on a tropical island. Just the “break” one needs when you’ve been dealing with a Melbourne winter. The deserted resort also gives the place a tiny touch of end of the world, ghostown charm. Highly recommend it as a holiday destination, given how beautiful and laid back the place is.

Onto the fishing. To be honest, with all the drinkning and socialising it was pretty hard to get away and fish the place properly. I only managed to get in a few sessions. While I am a passionate fisherman, I also quite like a beer and a chat and hanging out with the girlfriend, so for this trip at least fishing took a back seat and I spent a lot more time than I usually would partaking in other activities such as walks, beach footy, frisbee, games and snorkelling around the reefs. While most of that wasn’t fishing related, the snorkelling at least gave me an idea of what was around. It just so happened, the best fishing spot nearby happened to be the best snorkelling spot, so before I had wet a line, I had a good idea of what was out there. Around the headland there were really big schools of small fingermark, butterfish and small GTs cruising the reef. On the reef were the normal assortment of small colourful reef fish. More surprisingly there were also schools of big yellowfin bream and big mullet (sea and diamond scale) that would cruise by occasionally  In terms of bigger targets they were few and far between. There was a big resident barracuda that we saw most times we went snorkelling and at least two big GTs and one monster queenfish spotted by the others… So there were a few decent fish cruising around but not huge numbers… 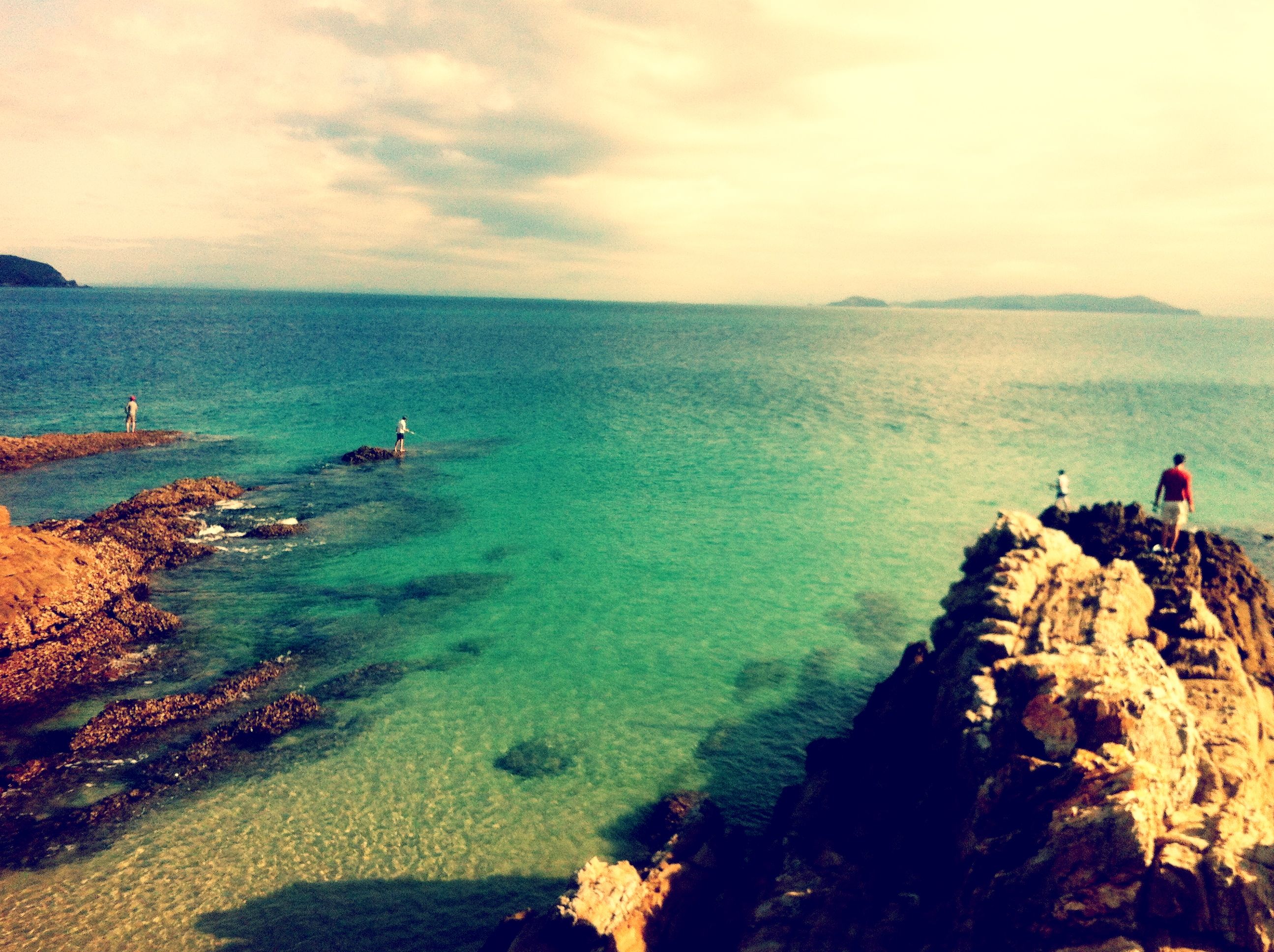 The first session we had off the headland was an early one, starting at about 630am, which after the third night of festivities felt really early, despite the fact on any other trip I probably would have been cursing how “late” we were, the sun was already up FFS. I had only brought up my 8 weight scott S4S and a few flies and it was all I used all trip. I’ve had it for a while now but haven’t had much of a chance to fish it, so it was nice to christen it. So far I’m pretty happy with it :)… Anyway, the morning session was one that oozed potential but in the end never really delivered. Nick who was casting little metal slugs off the rocks while I swoffed away managed a brace of small GTs and queenfish and lost one very good fish that looked like it was in the 70cm+ range, but alas after taking the lure off the surface near the rocks pulled the hooks on its first run. Soon after I saw a school of dart going mental off the beach and raced down. They were being harassed by two monster queenfish that appeared to be patrolling the beach… Every now and the the dart would be attacked by two green-backed beasts and the water would erupt into white foam for a few seconds before returning to tranquility,. I chased the schools of dart up and down the beach, waiting to try and get a cast at one of these big fish, but sadly I was never in the right place at the right time. In the hour or so of action, I managed one cast within 10 meters of one of these big fish that was actually in front of it, but no luck. I did however, catch a handful of dart while trying to catch their tormentors which was a nice consolation prize 🙂 First fish on the 8 weight and first fish on homemade flies, so at least I achieved something!

That session was the only real session I managed. The others were all shorter and sandwiched into free times that often weren’t ideal (tides, time of day etc weren’t what you would ideally want). In any case, across the five of us that were fishing, the boys throwing slugs around landed another 4-5 mini GTs. over the rest of the trip. On the fly rod I wasn’t quite a successful, I only managed to land a few more dart and one butterfish. I got very close to ticking the bream and GT on fly boxes but managed to drop both! 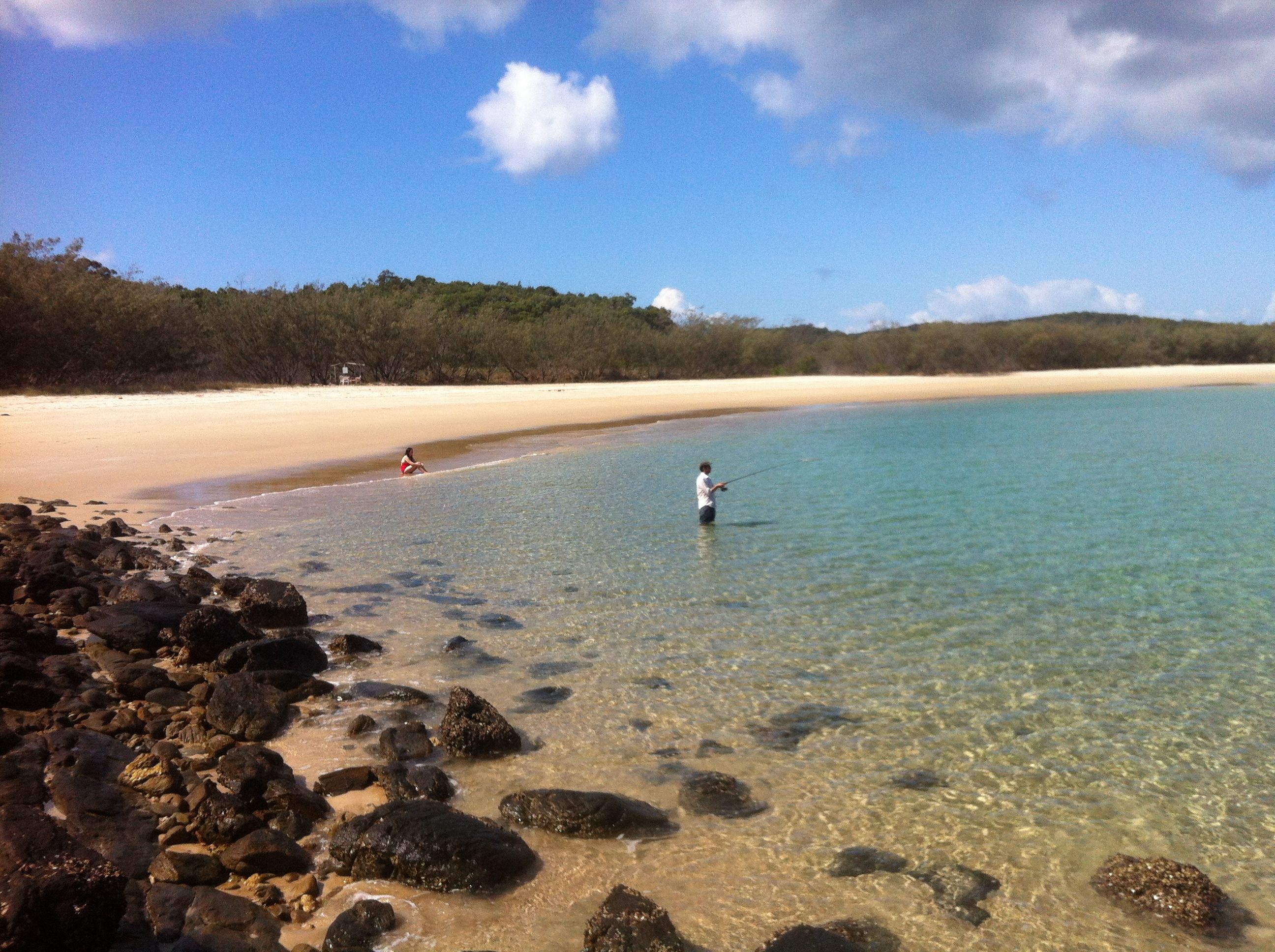 All in all it was a great week though and I didn’t actually mind the fact it was a “holiday’ in the more traditional sense rather than a fishing trip. Sometimes fishing isn’t the most important thing in the world and has to fit into the gaps between other activities and you know what, sometimes thats actually pretty nice. Its not often you get to hang out with 40 mates, talk sh*t, drink rum and generally get up to mischief and in the end that took priority over fishing. However, the trip did rekindle my burning desire to get up to the tropics on another fishing trip asap!

Anyway, the trout season in Victoria has opened, so thats one positive of returning home. Until next time. Good luck

Ps- apologize for the photo quality. I left my camera on the bed at home, so only had the iphone, which then spent a lot of time in my bag, while I waded around… Meaning poor picture quality and not many fish shots. Whoops. Lee will be angry at me 🙂