It’s nice when a plan comes together. But for some reason, I was umming and aaghing about heading down the coast this weekend. Luckily, at the last minute, I decided it was probably better than sitting around in chilly Canberra and jumped in the car with keen fisho, Andy O’Brien, to hit up Wallaga Lake for the weekend.

On arriving, we said hello to my parents before heading down to the beach for a look. Starting at ‘Leander’, about halfway down Hayward’s beach, we found some good structure and started casting. It looked good, but due to the sizeable swell we weren’t getting the distance required to get into the ‘zone’, which was the foamy green water coming off the back of the sandbar into the gutter. As the light was fading, we decided to head up towards Camel Rock for a few quick casts to see if we could find some fish. First cast on his new 7 foot rod, 8lb braid and with a 30 gram slug, and Andy was hooked up to a nice salmon. I was soon on, and we landed four in quick succession and lost about twice as many. We felt pretty chuffed with a good start and headed back to the comforts of fridge, footy and couch.

The next day we decided to head out on the boat to try our luck. I was feeling pretty pessimistic to be honest. It had been quite cold and I suspected we would have to work hard to find the fish. However, we speculated that any flathead in the lake would be warming themselves in shallower, north facing bays, and headed straight across the lake from the boatramp to the series of small bays between Fisherman’s Bay and Long Bay.

Third cast, and I was on! It was a nice flattie of about 45cm, taken on a 60mm squidgy fish in the gary glitter pattern. Andy hooked up shortly thereafter and we were pinching ourselves due to the cracking start. We hooked another 6 fish or so in these bays before it slowed down. With almost no wind, we were forced to use the outboard to repeatedly move, in order to cover new ground. The warmth of the winter sun was beautiful, and the flatties seemed to agree.

The theory seemed to be working, but for some reason I was determined to try my favourite spot near the telephone poles. The wind had picked up and we had a good drift, but the tide had started flooding into the lake, bringing with it cool, clear water. No touches.

As such, we decided to head right up the back of the system and stick to the original game plan. After fossicking around up Green Bay, where we picked up another good fish and had some touches from leatherjacket, we went in search of warmer water and headed right up Long Bay. Cruising along at full speed, we were surprised to see the bottom come up quickly and killed the motor. We were only in about a foot of water, so we motored over to some greener looking water and found a dense patch of small fish. For about 10 minutes, it was a fish every cast or two, with about 10 flathead finding the boat and most of them going back.

We were both feeling pretty excited about finding some fish and decided to head right up to the top of the green channel and work it comprehensively. We managed a number of good flatties and two nice bream on plastics. All of the fish fell to squidgies in natural colours. I’m sure pretty much anything would have worked, but this is what we had on at the time. We were also using a bit of S-Factor, which seems to help in the cooler conditions. In hindsight, I suspect that many of the touches we were getting were bream, and am keen to head back up to this spot to target them on vibes and smaller plastics in the 40-50mm size range.

Working our way back towards the main bay, Andy spotted some commotion on the surface before hooking up to a fast, head shaking fish. Tailor! Soon they were busting up around us and we tied on some slugs and had a ball. We only landed 5, but it was in quick succession. Noticing that they were coughing up small glassies, we decided that there would be flatties sitting beneath them cleaning up the scraps, and going back to soft plastics soon had two or three nice flatties in the bucket. After about 4.5 hours on the water, we decided to call it a session, and headed back for coffee and bacon. All up we ended up with 9 flatties and 5 tailor…with at least 15 flatties returned to the water. Not bad for winter fishing!

We managed to blow the motor up on the way back across, and were forced to row the last 200 metres or so back to the ramp! D’oh! Boats are a lot of fun but also a lot of trouble. I suspect the cooling system has become blocked somehow and am hoping it’s not too expensive to fix…in any case, it was quite humorous to be rowing across the bay. Luckily there was no wind, or we would have been in a spot of trouble!

Later that day we headed to the beach, thinking that the salmon would again be on. Unfortunately, we didn’t catch any. Not sure why they weren’t there, but we were pretty tired so didn’t cover a lot of ground. This is the key to salmon fishing. I did, however, manage two good tailor, one of which was nudging 2kg. Great fun!

By this stage, were were both pretty happy with the weekend’s fishing, but decided to have another session on Sunday morning to try our luck once again. We headed out to the rocks at Murunna Point, and were greeted by a rolling swell and some FISHY looking water. After about 5 casts Andy hooked onto a nice salmon, and I wasn’t far behind. Andy landed his but mine got tangled up in some cunje. A few minutes later, a particularly large wave gave Andy a good head-to-toe drenching, and we decided not to push our luck and called it a day. However, we had miscalculated the time and realised we had at least another hour’s fishing, so headed down to Leander once again to see if the low tide structure was more accessible than the first day, when we weren’t getting the required distance. Armed with our bream sticks and some 40 gram slugs, we walked down the beach and found a classic gutter, with open water on one side, a nice sandbar at the back and a narrow choke. Andy was first to hook up, and caught three to my one over the next half an hour or so. All nice salmon of about a kilo – perfect eating size.

Needless to say, it was a great weekend’s fishing. Winter shouldn’t turn you off, particularly when you can catch flatties, salmon, tailor and bream without too much effort. It was one of the first weekends I’ve EVER experienced where we didn’t draw one blank session. We also didn’t touch a piece of bait for the whole weekend. Can’t wait to do it all again soon! 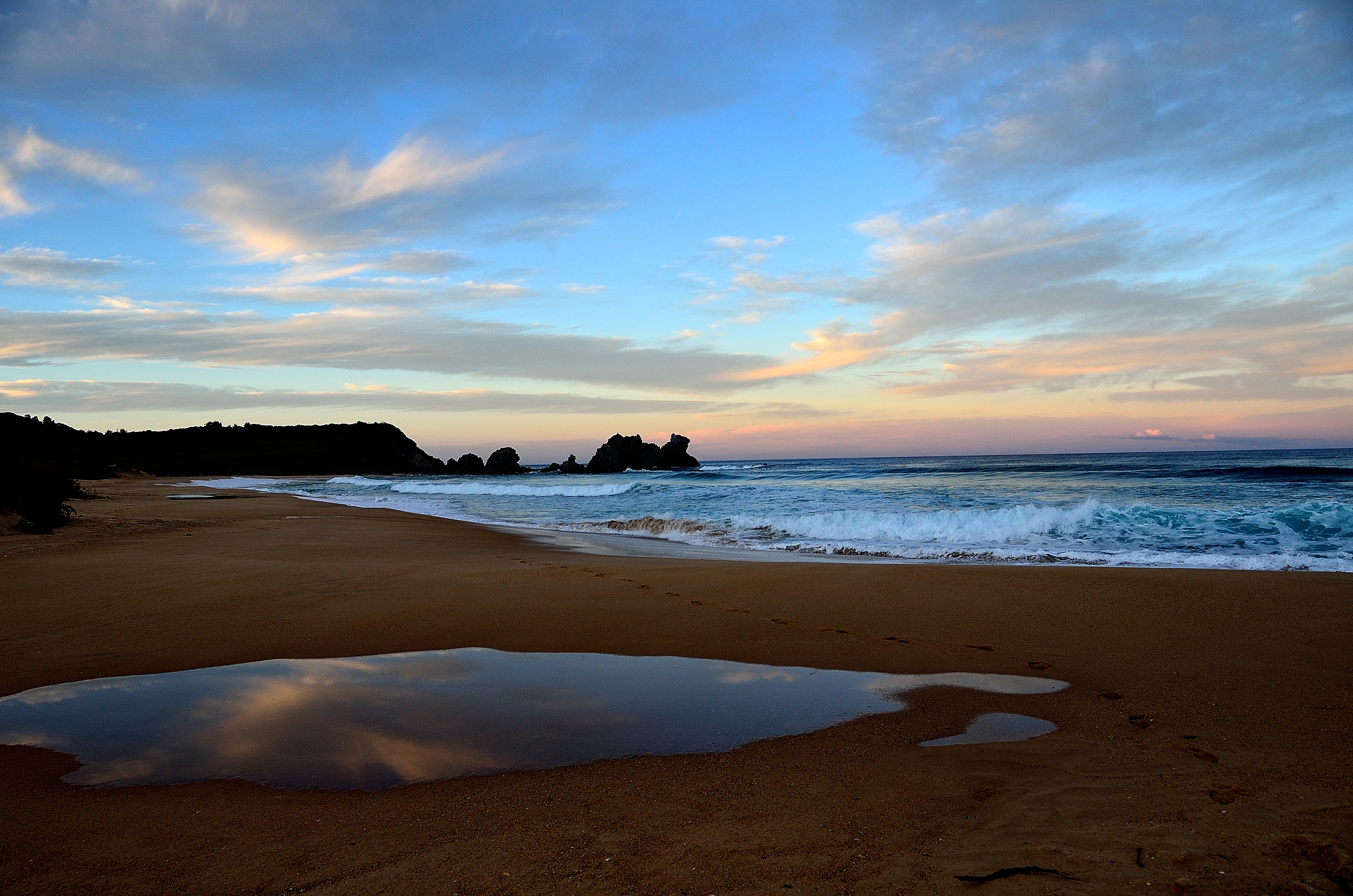