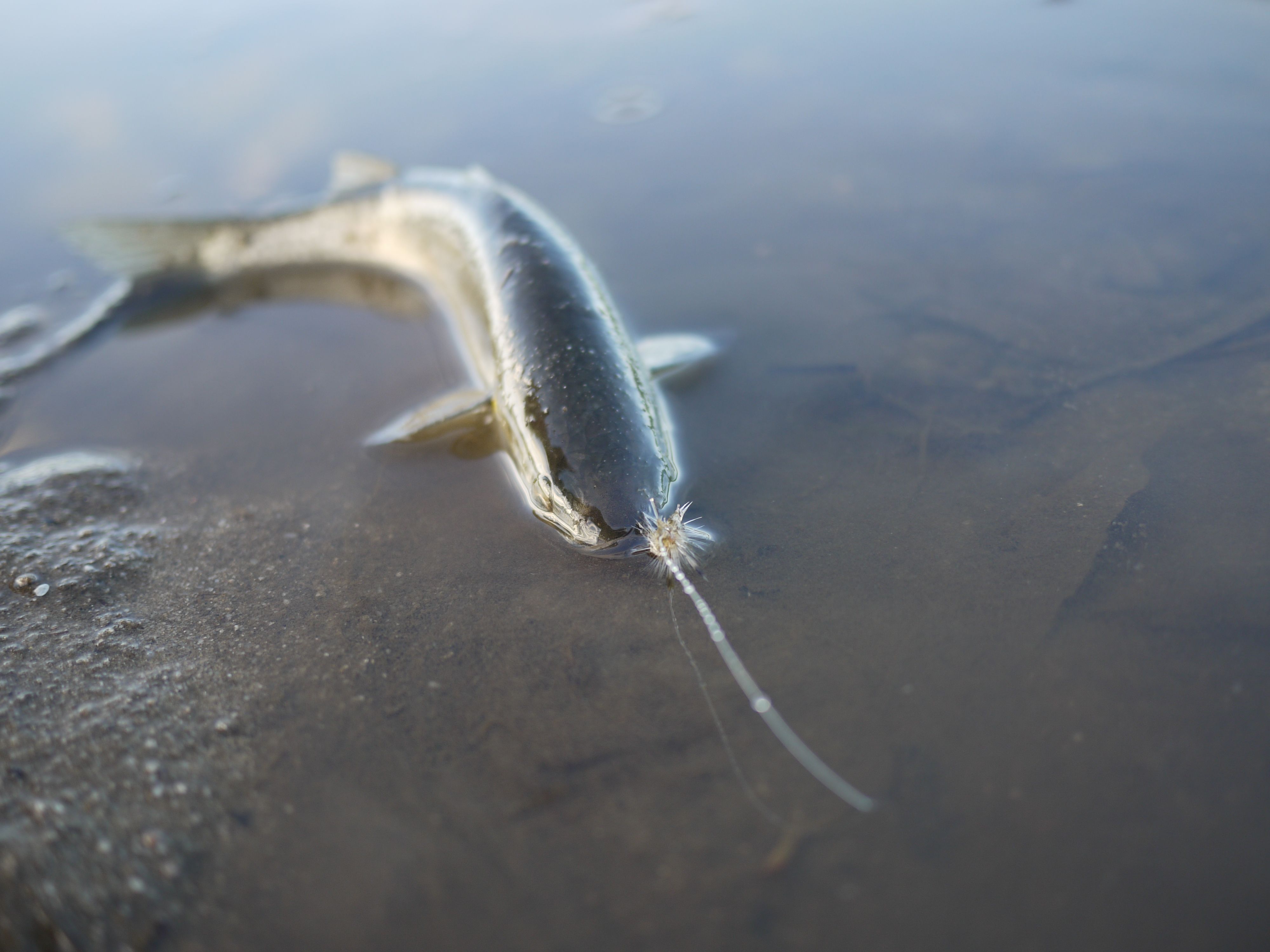 I got a tenkara outfit about a year ago, which was the beginning of my slow take up of fly fishing. To begin with I didn’t use it much. Lee gave me his old 5 weight a little while after that. As the past year has progressed both outfits have been getting more and more use as I’ve slowly become a fly fisherman, although its only really in the last 3-6 months that I’ve been using either outfit with anything approaching regularity. While my success on trout around Melbourne has been minimal (I’ve only landed a few so far, and it was only a month ago I started leaving the spin gear at home, forcing myself to learn faster), I have had far more success on mullet and have been having a great time chasing them. While its probably the easiest form of fly fishing you can do, its been great casting practice and a lot of fun. 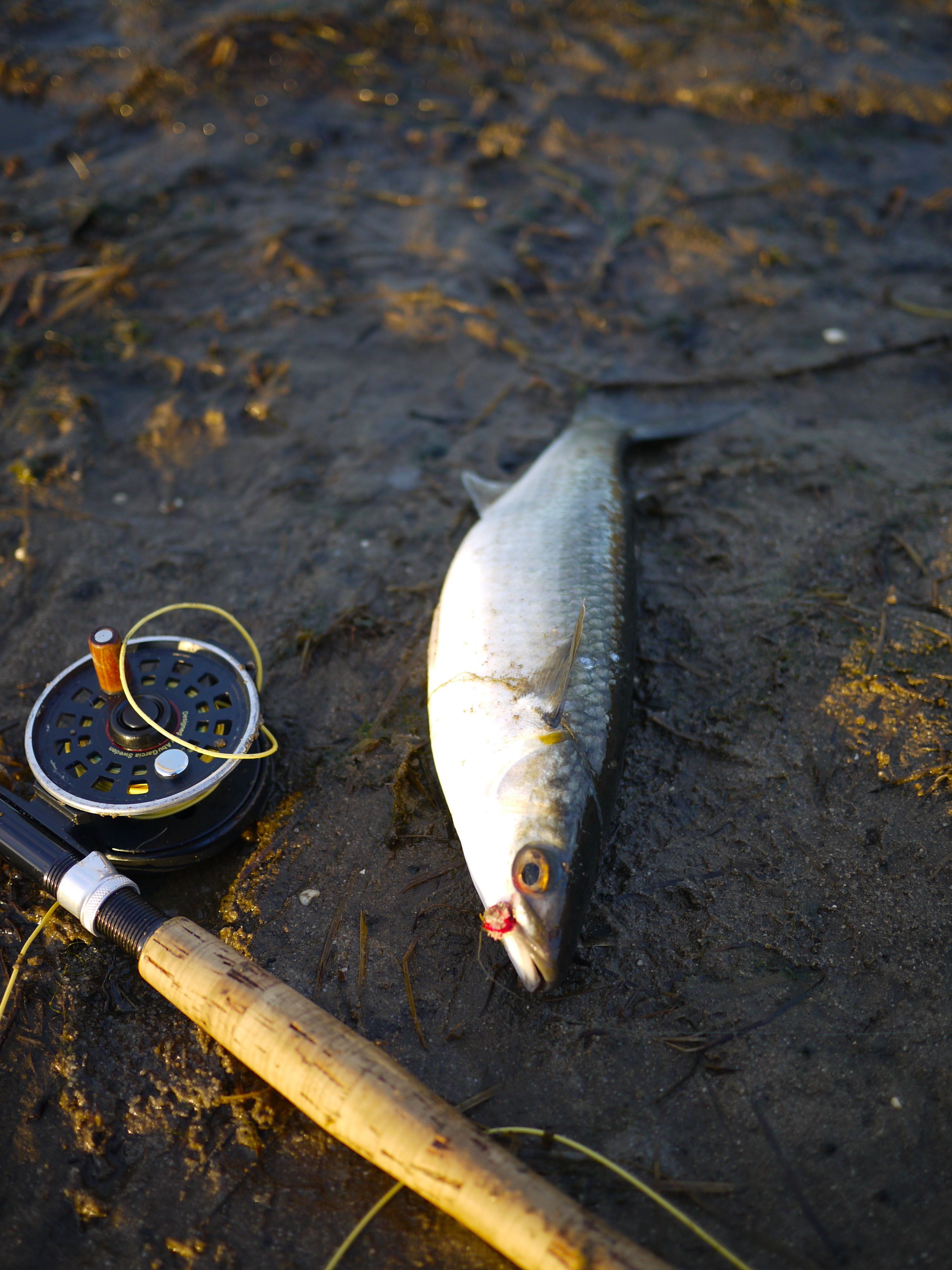 The truth of the matter is that chasing mullet on fly is dead easy if you want it to be. Just like bait fishing for them but you use an imitation bread fly rather than a piece of bread as bait. Simply start a berley trail with nice white bread, wait for the mullet to arrive, cast your fly into the berley trail and wait. Its as simple as that if you want it to be 🙂 In fact, I’d say its even more effective than floating bread baits in your berely trail because your flies never need re-baiting, you’re almost always fishing and you’ve almost always got a lure in the water waiting to catch fish. I’ve had numerous sessions where I’ve landed 20-30 fish in an hour or so doing just this. In fact, in many waterways where the mullet are “used” to bread, you don’t even have to berley, just find some mullet and start casting your bread fly at them and they will hit it with gusto. In terms of retrieves vary it up. Some days just leaving it there works best, others a very slow retrieve, others casting the fly regularly and getting it to really slap down works best, some days light landings are the way. It just depends on the mood of the mullet 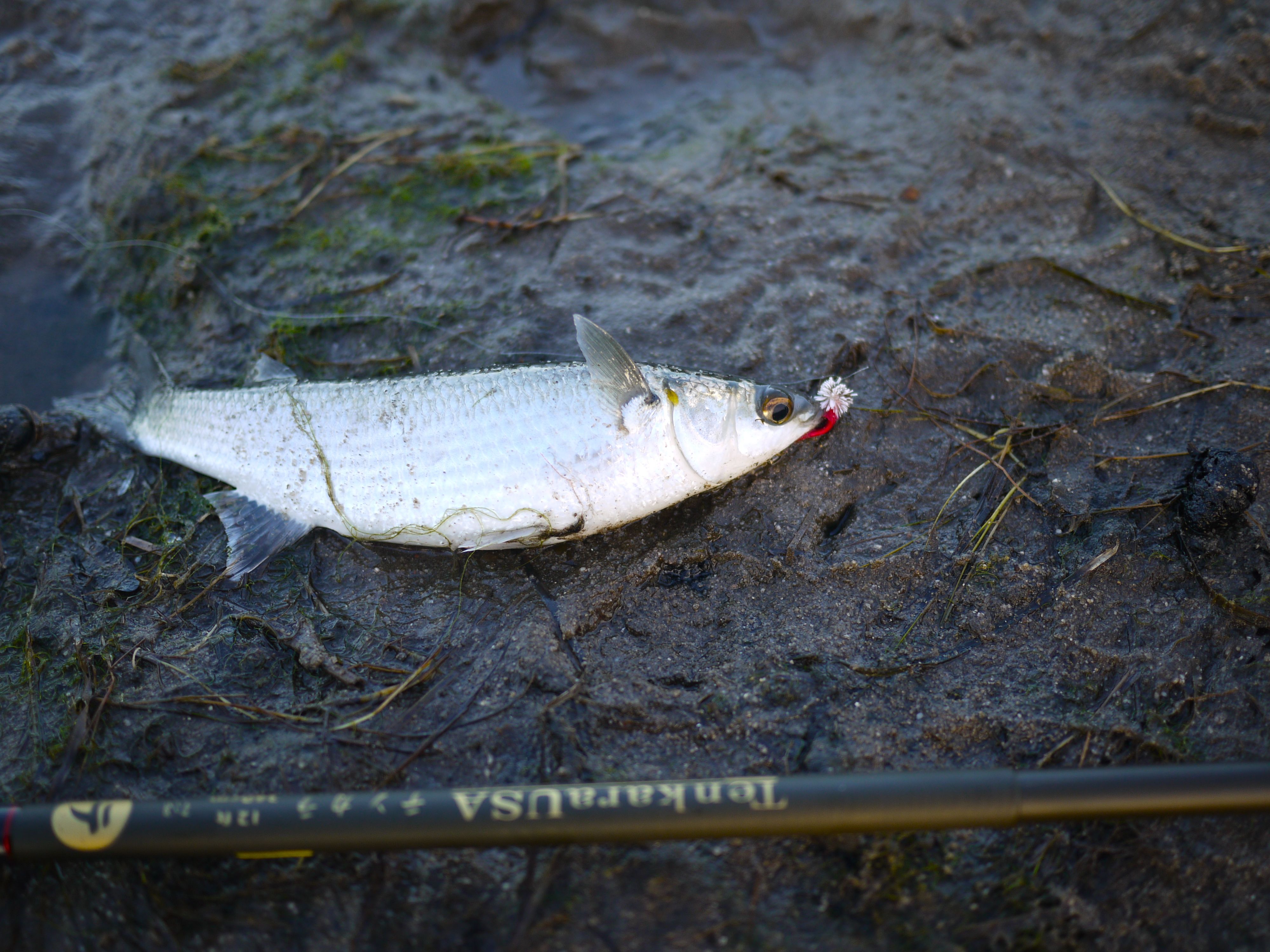 However, using bread flies isn’t the only way. In fact fly fishing for mullet is a lot more fun using tiny little insect pattern dry flies (in my case little trout flies because they were what I had). Often you’ll see mullet sipping something off the surface. I’m not 100% sure what a lot of the time (detritus, insects?), but its often most pronounced around dusk. Simply identify your target, a surface feeding mullet, and cast you’re little fly a meter or two ahead of the fish. Often they will notice and focus in on it immediately. There isn’t much better than seeing a bow wave fly in at any surface presentation, be it a popper, fizzer or a tiny little ant pattern fly. The best sessions I’ve had so far have been doing just this, wading the flats casting at surface feeding fish. Over Christmas I had a truly hot session, where I was hooked up for two hours almost constantly, easily landing in excess of 30 fish. It appeared the fish were feeding on tiny little black insects, so I was using a tiny little black midge ball dry fly. On every cast to a fish the little fly would be immediately sipped off the surface and I’d be on. I’ve also had success on little green and brown dry flies, which I assume are imitating weed and of course on tiny white dry flies which are a bit like cheating, given they are probably a decent bread imitation as well as potentially imitating whatever it is the mullet are sipping off the surface. Again, sometimes very slow retrieves work best, others just leaving it stationary.


I’ve also had a fair bit of success casting tiny green, white, brown and black nymphs as well as little brown and green weed pattern flies at mullet feeding mid water or near the bottom. Effective although a little less fun than fishing dry flies. Again its all pretty simple, identify your fish, cast your fly in front of it and wait for the fish to pick it up, which is usually on the drop. Slow sinking flies seem to work best. When using both little nymphs and dry flies, stealth becomes far more important than using bread, as does identifying and sight fishing your target. Some of the flies I’ve been using are tiny so have to land relatively close to the feeding fish to have a decent chance of being spotted and if you spook the fish, you’ve got bugger all chance. The added bonus chasing mullet this way is that its great casting practice, which will hopefully translate into success in my local trout waters. Recently, I’ve only been resorting to bread flies as a last resort, preferring more “natural” although lower percentage presentations. Another bonus of the more natural presentations is I’ve been picking up a few sea mullet, which are notoriously hard to tempt on bread. To date I’ve only got one or two sea mullet on bread flies but half a dozen or so on more “natural” presentations (usually sinking nymphs). While sand and yellow mullet have dominated my captures to date, its been great to get onto a few bruising sea mullet, to test out the gear. My biggest to date isn’t large by sea mullet standards (42m), but it was a hell of a lot of fun.

Lastly, I’ve also had a fair bit of success on Sand and Yellow eye mullet casting, tiny little clousers, prawns etc at them, which I assume are imitating little crustaceans and prawns the fish are feeding on. Worked back with short fast jerks and long pauses I’ve caught a fair few fish.

The gear I’ve been using is what I’ve got available and I usually chop and change depending on the size of the fish. If they are under 30cm on average, I use the tenkara (biggest fish I’ve managed to land on it has been 35cm), catching small fish on that outfit is a lot of fun. If they are bigger than 30cm on average, I get the real fly rod out and use that as bigger mullet can sometimes break the very light leaders (6X tippet) used on the tenkara. In terms of locations, any estuary will hold mullet, start by focusing on flats with nice weed beds. Lastly, while I’ve talked up the amazing sessions I’ve had, mullet can be a little fickle. When they are on they are on, but sometimes they can be hard work and I have blanked on numerous occasions. Its like most fishing, the mood of the fish is all important and dictates how you should be fishing for them, how stealthy you have to be, which presentation will work best on the day or whether you catch anything at all. All in all thats about it. I’m definitely not the most knowledgeable person on the subject, but I am having a great time, which is the important bit I suppose. In a year a two I might do a re-write, reflecting on how far I’ve come and how little I understand now. However for now, I hope thats of some use, and if you haven’t started fly fishing, get out and get into it. Its awesome 🙂 Also if you have any tips, send them my way!

20 thoughts on “Fly fishing for mullet”