Over the recent Aussie day long weekend, I managed to fulfil a 2 year old promise to visit a good mate who has moved to Marlo in Victoria. With a sleepy population of about 300, Marlo is famous for being where the Snowy River meets the sea… and the pub. On Saturday night, there were up to 20 cars at the pub, apparently that was cranking! As I said, a sleepy little coastal town.

It’s also the gateway to some of the most untouched sections of coastline (and best fishing!) between Melbourne and Sydney. For whatever reason the highway in this part of the world is up to 20 kms inland from the coast, connected to the ocean by a network of winding tracks and roads. Expect to add at least thirty minutes to your travel time before you get to cool off or wet a line. Somehow though it always seems worth it, especially if you like that feeling that you’re the only one at your destination (but a cold beer is never too far away!)

An expedition to Point Hicks

The five of us piled into the Hilux and 90 minutes later we were at Point Hicks in Croajingolong National Park. It’s a popular bush camping spot and well known for its huge sand dunes. After an hours walk through coastal scrub we reached the ‘small dune’. Apparently we weren’t alone. Every 5 minutes or so we would stumble across a set of Lace Monitor (Goanna) tracks. Either there were hundreds of these prehistoric creatures or each one spends a large part of its day wandering aimlessly around the dunes. According to Wikipaedia, the later is closer to the truth, they wander up to 3 kms a day looking for food.

We pushed on towards the ‘big dune’. The sand was burning hot, the hills steep and the March flies persistent to the point of insanity. The sweat was flowing and tempers were frayed. As we emerged from a patch of scrub to the site of rolling hills of sand however, all was forgiven.

The weird thing about sand dunes is that your perception of distance is all out. To prove this point the boys challenged each other to a race to the top. It couldn’t be more than a couple of minutes, could it?

Apparently it was further than first thought.

After many artistic and not-so artistic photos we plummeted down the dune to the river which would take us back to the campground and the start of our hike. It was here in the campground we saw our first Lace monitor in the flesh. 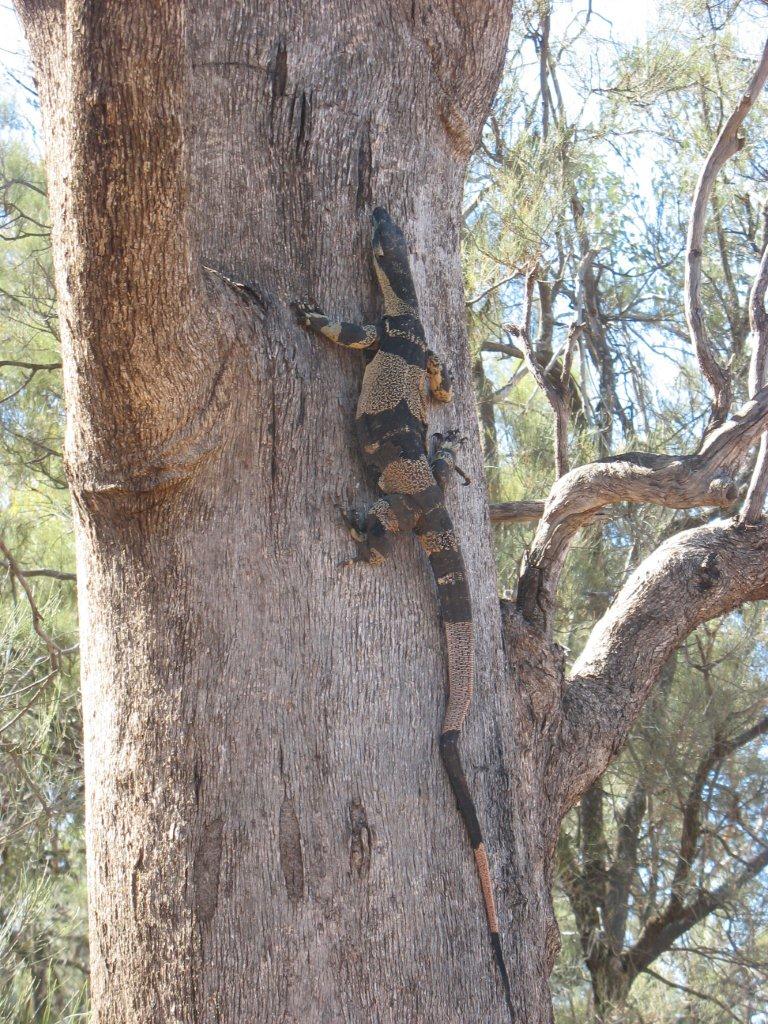 Ok you get the idea, this is the type of country where few people bother to venture. So enough travel tales, this is a fishing blog after all, I’d better get down to business. Would the fishing meet my high expectations? I had put in a solid session at the beach at West Cape one afternoon. The sun was setting, the tide was coming in and there was some good structure along the beach. Dozens of casts resulted in just two hook-ups, both salmon, and both threw the trebles during some aerial shenanigans. I have this theory that the more you want to land a fish to feed your mates for dinner, the more likely you are to come home empty handed. So far in 2012 I have blanked out on Australia Day and New Years Day, I’m 0-2.

Not to be defeated, I went fishwalking along the mighty snowy river on the last morning before the drive home. I should have known that with everyone destined to spend that night in separate places, the fishing would be hot 🙂

It was my first time fishing the lower snowy, and I’m happy to be corrected, but it seemed to be a fast flowing river over a fairly featureless sandy bottom – I couldn’t find fish at any depth on plastics. Either that or the incessant roar of the wake boats and jet skis was putting the fish off? I kept walking around to the river mouth.

The beach next to the mouth looked perfect – a big dark blue hole with the white water and contents of the river spilling out into it. Apparently the Salmon thought it looked pretty good too. No sooner had I started my first retrieve with a metal lure and I was on. From this moment it was a fish a cast. They weren’t huge fish, a bit less than a kilo each and still had their juvenile spots. But watching several fish appear behind your lure competing to eat it first, or to drop a fish only to hook one his buddies seconds later – little things like this make these sessions all the more memorable.

One of the downsides of fishing ultra light and mobile (fishwalking) is that you don’t have an esky or an obvious way to keep your catch cold. I can’t remember who first showed me this trick, but it’s a cracker. Scoop out a hole into the cool moist sand and pop your fish in (after you’ve quickly and humanely killed it), head first, leaving just the tail sticking out. The fish stay surprisingly cold and more importantly out of the sun. If done right, not even a Sea Eagle should be able to extract your fish – although from experience I don’t recommend letting it try!

So that pretty much wraps up the Aussie day long weekend in Victoria’s East Gippsland. I think everyone was pretty content with their few days away. We saw Lace Monitors and cool sand dunes, got to swim every day, experience some hot salmon fishing, great coffee at the Marlo tackleshop and to top it off an Aussie day BBQ and hottest 100 countdown with mega ping-pong and foosball tournaments.

What more, everyone got to take home some salmon for the table. Check out Simo’s Snowy River salmon curry with coconut milk, fresh veg and coriander. A similar recipe of Lee’s is here.

2 thoughts on “Sambos at the Snowy: Victoria’s East Gippsland”