It was our second trip to Bare Sand but the first since it was closed to the public. A bomb removal project was underway and access to the island was restricted to men with guns (or maybe just metal detectors), turtle researchers and us.

It was through the turtle research angle that my determined housemate managed to extract a permit from a Sergent Major General whatever in Canberra. With the golden ticket sorted we filled the boat with camping gear, funny hats, frisbees and other essential island equipment.

Bare Sand resembles an offshore sandbank and is around 25 km by water from Bynoe Harbour in the Northern Territory. It is a truly special place. Turtles are an obvious draw card – they lay eggs here throughout the year – and there are some great people running a long term study into the world of of these ancient reptiles. We helped (or at least provided an audience) while eggs were counted, flippers tagged and hatchlings released to the ocean. I learnt a lot about turtles that night and my appreciation of these splendid creatures has grown even more.

We arrived in perfect conditions – neap tides, smooth water and an incoming tide. It’s amazing how much you can fit into a boat! It’s worth remembering that these places can get very exposed to weather and big tides produce reefs in areas you thought were safe from the time before.

When a bikini lounge becomes a ute – Once the boat was unloaded we risked the outgoing tide over the reefs to collect driftwood from a nearby island. As we slipped back towards Bare Sand (shown in the background) the clear water meant we could watch turtles swimming over the reef. 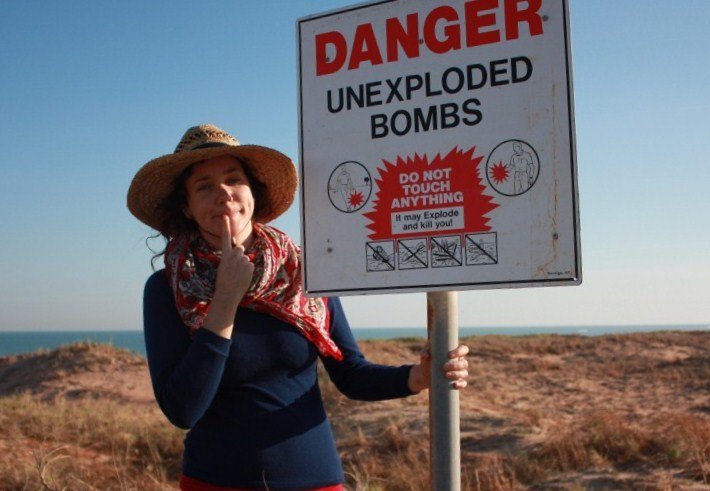 Good spot to swing a hammock? – pic by Deep Diver

Campsite selection has its challenges on Bare Sand! The beach has been cleared of missiles but the dunes are still exposing their explosive secrets every now and then. There is a 3 year process in place to remove sleeping missiles permanently but for now camping on the beach front is the way to go. There are no mozzies and sandflies here – not in my experience anyway, and that is a significant bonus but probably doesn’t completely mitigate the bomb threat. Ah so dramatic… 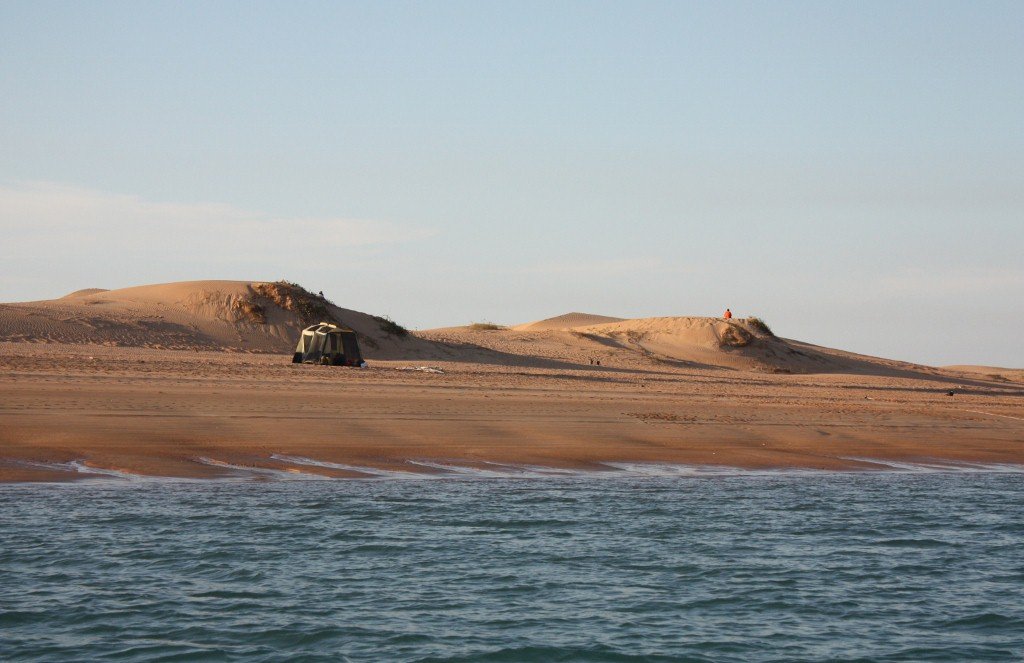 Yep – pretty shabby campsite. A fire added some reassurance from crocs. It’s also a good idea to avoid leaving fish entrails on the sand. It wasn’t until the morning that we were told about a salty coming up the beach to scavenge on fish scraps buried by campers some time previously.

The camp was set, the wind had dropped and obviously it was time to go fishing. We trolled our way out the channel that leads to deeper water for a few hits but not hook-ups. There was a semi decent little wave peeling off the point. Refer to previous paragraph if you are thinking of dusting off the old stick…

We needed a blue water fix so headed towards one of the reefs a few k’s offshore. Not that we needed to go that far though. The tuna soon announced their presence via violent treatment of baitfish around the boat. With nervous hands we tied on metal slugs (small baitfish profile lures) and fired off the longest casts we could manage. It turned out to be one of those sessions where it all comes together nice and easy.

Tuna! Anna with a very nice Mack Tuna (Euthynnus affinis) which was quickly released. These fish are great fun on light tackle. You spot them on the horizon, race over and hopefully make a decent cast off the bow of the boat. Often you will only get one shot before the school disappears and emerges seconds later – 200m away! Back to step one. Sight casting to big, sleek fish like these tuna is worth the effort though. Just make sure you have plenty of line on your reel and spare fuel in the tank!

It was great to get my housemates out on this trip but getting the required distance on the casts was difficult. In the end I was up on the bow launching lures and passing back screaming reels to whoever was game to tackle the next fish. This worked really well until it was my turn to hold onto one. At that point the fish shut down, maybe it was a tide change? bad fishing karma? I don’t know but it didn’t matter because in the afternoon I ticked a new species off the list.

My first Queenfish (Scomberoides commersonnianus) . At just under a metre it was a great start. This fish went ballistic and spent more time in the air than the water, the main incentive being a reefshark that was trying to invite it to lunch. This fish ripped line of my reel in some lightning runs. I would have liked to release this one, especially as on its last jump it landed on the sand – a brave attempt to escape, but it had battle wounds and wouldn’t have survived the sharks now marauding in the shallows.

This fish, I should mention, really belongs to Deep Diver Saunders who made many a futile cast prior to my picking up his abandoned rod. I had a few flicks and then the show began. DD was not happy!

While we were sleeping a group of female turtles honed in on the island, laboured up the beach and layed dozens of eggs in their impressive excavations. We were roused by the researchers starting their midnight rounds and set off with them for an insight into turtle biology. Most impressive for me was the fact that these turtles would have been born on Bare Sand and somehow made their way back here year after year to lay the next generation. Due to the species mix that visit the island this is a common occurance throughout the year which is why its such a great place for research.

Talk about vulnerable! Life starts tough for these guys and it sometimes takes upto 6 hours to dig their way to the surface. They use the moonlight to navigate down the beach and enter the water where predators await. Once they are swimming they have around 2 weeks to search out their first meal – squid eggs. If they don’t find a patch of eggs in time they starve. A good reminder of how closely some species are interlinked with each other.

Bare Sand is a beautiful place that shelters a dangerous past. Access may be difficult but I will definately be going back there someday, even if I have to dress up in a turtle suit!