I had planned to pick my cousin up at six, however a late night and a few beers meant I was woken by my phone ringing and Brett wondering where the hell I was, “Bugger” I had to be back by one for a doctors appointment and had now lost two hours fishing. I eventually picked Brett up about 7:30 and we headed out to a small creek, a little less than an hour out of Melbourne hunting for trout.

We arrived to an absolutely perfect little trout stream, bathed in soft spring sun, and while it was probably nowhere nearly as spectacular as the New Zealand trout streams Graz has been writing about, its an impressively beautiful piece of water given how close it is to our second largest city. On that day the trout were playing ball, half a dozen casts and Brett landed the first fish, a lovely little brown trout. Small trout from small waterways have to be some of the most gorgeous freshwater fish you are likely to come upon. As the morning progressed we landed another ten or more fish, the highlight being an absolute “monster” of 45cm. We left the fish biting and were back in Melbourne in time for my doctors appointment. Not bad for a morning that was cut two hours short. 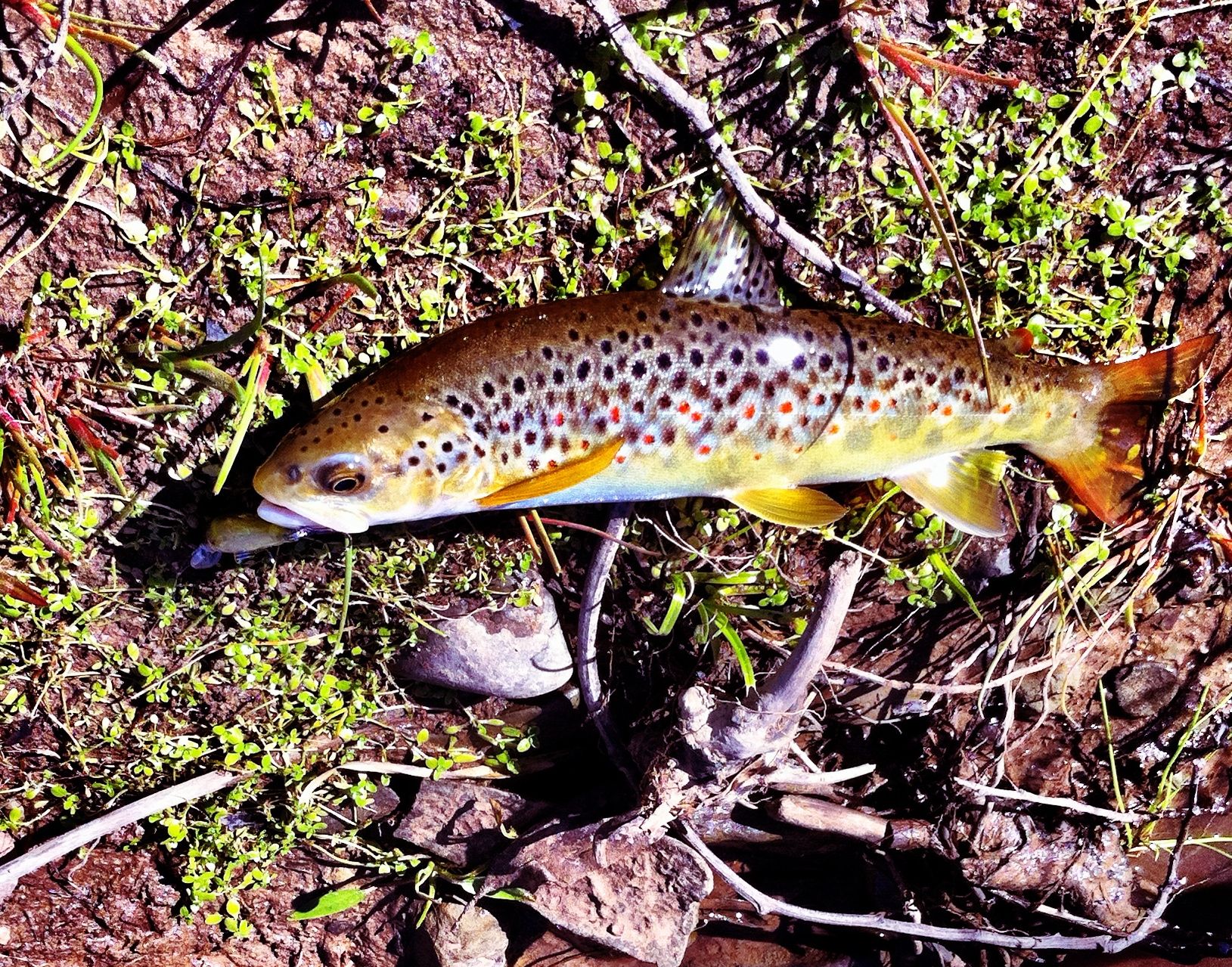 Since moving to Melbourne exploring the multitude of gorgeous little trout streams within a couple of hours drive has become a bit of an obsession. While I’ve had a few attempts at chasing the saltwater fish that inhabit the harbour and wharves around Melbourne, such as Docklands famous bream, its fishing these little streams that has really excited me. There are simply so many options! From the Rubicon, Acheron and other famous trout streams to the multitude of tiny streams that dot the hills, even the upper Yarra 🙂 So far most of my exploring has been has mainly focussed on the tiny waterways. To be 100% honest, I have mainly been picking my fishing destinations not on how good the fishing is meant to be but on how pretty the places are. Preferring to fish Mountain Ash stands and the upper reaches of the creeks and rivers for bonsai trout, than farmland and more open forests chasing their larger cousins. The scenery and the number of little fish making up for their lack of size. Sometimes it pays to realize fishing can be about a little more than catching fish and to adjust accordingly. That said I do get a little grumpy if I fail to tempt at least half a dozen bonsai trout in a day, no matter how gorgeous the scenery, which I suppose is my inner fisherman coming out 😉 As Rache would say, catching is more fun than fishing.

During my explorations, I’ve mainly been using celtas, soft plastics and little minnows fished on my 2kg bream gear. By a fair margin I’ve had the most success on this gear, but thats mainly because its the gear I’m used to using and am comfortable with and well its really not fair on the fish. So, on all my trips I have made the conscious effort to get out the tenkara or the fly rod, even if its only for 15 minutes to give the fish a chance. As I have chronicled in this blog, I’m a VERY new convert to fly fishing and I will say this: small mountain streams with overhanging vegetation are probably not the best place to learn how to fly fish. So far my inept efforts haven’t resulted in a landed fish (three rises and two hookups is the best I’ve been able to do, a third if you count accidentally hooking a fish on the backcast and launching it 10ft into the air), but with persistence, my rapidly improving casting technique and a new found ability to not get caught in the trees on 50% of my casts, I’m confident my first fly caught trout isn’t too far off. Like starting out with most new fishing techniques all the frustration and time untangling my line from trees will pay dividends in the future. When starting something new it really pays to be persistent, even though that usually means catching less fish while your learning.

In any case the point of this blog was to encourage any Melbournian fishermen to properly explore the trout streams we have so close to us. The rewards will be well worth the effort. After moving from Canberra I was expecting to be forced to travel further afield to find pristine waterways packed full of voracious little fish. The pleasant surprise has been that Melbourne has an absolute plethora of great little streams on offer, relatively close to the city. I consider myself incredibly lucky to have these pristine little streams so close to Melbourne. While its not New Zealand I can head up for half a day and be back to do other things (like my washing, taking the GF out for afternoon beers, gardening etc) in the afternoon which is pretty special. The number of different little streams also means that there is constant exploring to do if you wish, which is one of the real joys of fishing as has been covered in the fish-walking post. So for any of you who live in Melbourne, hop in the car, head for the hills and get into the trout. Or at least spend a day hanging out by a gorgeous little stream far away from all the hispters in Collingwood while you learn how to fly fish 🙂 And just remember fish responsibly, I now know a few of the trout “by name” in some of these little streams and it would be a shame if they disappeared.