The water was crystal clear and I could make out the seductive waggle of the lure metres before it reached my feet.  After fifteen minutes of slow retrieves I felt a really solid <thud>  from the depths. Was it a rock fish? A snag fish? Head shakes …  I was on!

Two weeks after first arriving in NZ I find myself back in Queenstown after a magnificent loop around the south island.  On the fishing front, not much to report (there are so many other things to do!) except that you could spend a lifetime exploring the trout lakes and streams of the south island. They are literally everywhere.

Before I leave for the north island however, I’m determined to get on the board, and with two or three hours before our dinner engagement, ‘conditions are perfect’.

Only twenty minutes drive from Queenstown is the idyllic body of water known as Moke Lake.  If you’ve only got a short time in Queenstown consider the drive, if not for the fishing then for the amazing views. 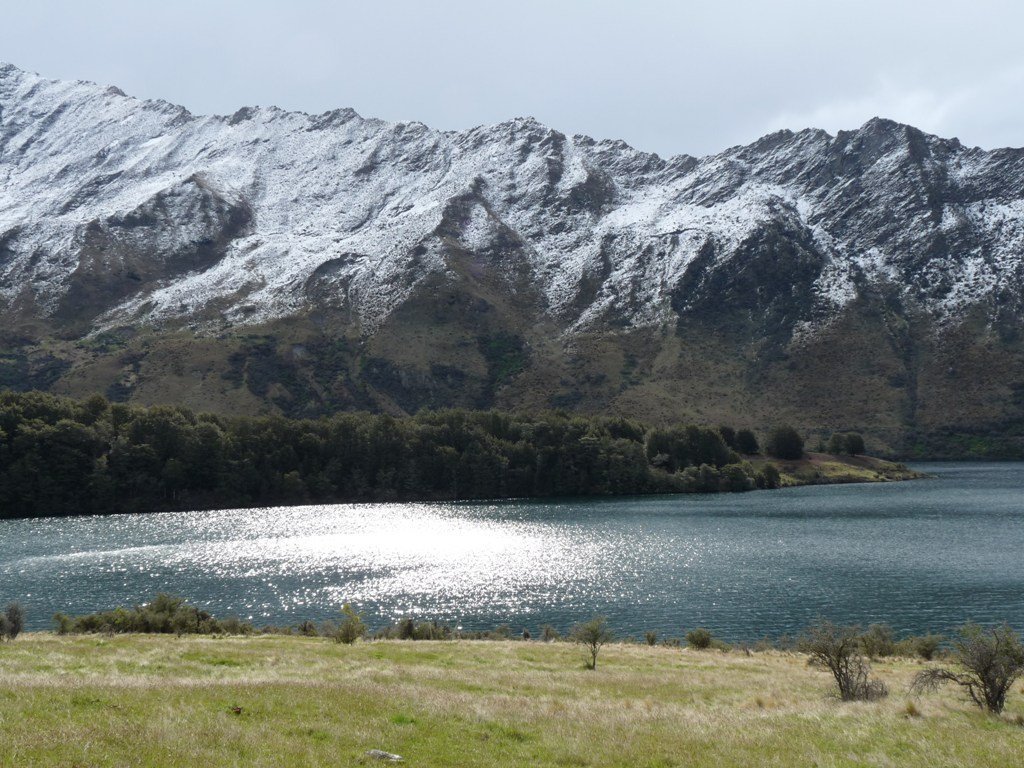 That’s good enough for me – time for a fish!

My choice of weapon for this scenario is a Tassie Devil in pink.  The pink of a juvenile rainbow trout really seems to excite (or possibly annoy) bigger fish. “Tassies” are relatively heavy, allow long casts and have a quick sink rate.  All good features for searching out a big lake.

The access is pretty good with only a short walk to the lakes edge from the road.  A dense gorse hedge around the bank limits the number of access points, but i could still wander from spot to spot with half a dozen casts in each.  I was trying a few different depths, but after some trial and error settled on a ten count (nice and deep!)

The water was crystal clear and I could make out the seductive waggle of the lure metres before it reached my feet.  After fifteen minutes of slow retrieves I felt a really solid <thud> from the depths. Was it a rock fish? A snag fish? Head shakes …  I was on! A couple of spectacular runs and jumps later and … I was still on!  Now to get the fish up onto the bank.  With my pride on the line and some expectant dinner hosts, I really wanted to land that fish.

With the landing net gathering dust some 2000kms away, my first reaction was to try and lift the fish over the small lip of the bank. While normally fine for smaller fish … what was I thinking! The weight of this 2-3 kg whopper Rainbow Trout caused the small treble hooks to pull free.  It slipped ungracefully back into the reeds and rushes and after what seemed liked an eternity, it swam away 🙁

In hindsight I probably should have played the fish out then gone for the “comfort lift”, placing my hand under the fish’s back, cradling it as I picked it up … Lesson learnt I suppose.

Call it male pride or just plain stubbornness, but I fished into the early evening trying to raise another bite.  Needless to say, I was late for dinner …

See you in the north island!