I figured it’s time for a trip report. Much of my time of late has been focused on Barra but last weekend I took advantage of a promising weather forecast and hit the big blue to a far off mark called ‘Sail City’.

This trip nearly didn’t happen because my usual fishing buddies were unavailable and I wasn’t keen on heading offshore solo. Enter the power of the internet. Up here we have a forum called ‘Fishing Territory’ and this site has been the source of heaps of info behind my attempts at tropical sportfishing. Rather than cancel my plans I put up a post seeking a deckie and boom, a bloke named Moff was on board.

While my housemates were worried I’d be heading offshore with an axe-murderer, it all worked out smashingly. In fact, Moff decided that we should take his boat and 4WD and all I had to do was turn up with my swag and a few rods. Moff also turned out to be a top bloke with a cracking sense of humour. Score!

So we found ourselves at Dundee Beach as the sun rose and with a light chop starting to build on the water. It’s a tractor launch here so we paid the dude $20 and Moff cringed as he watched his trailer get a thorough dunking in the salty brine. Better hose that out real good mate! Soon after we are smashing through solid chop while the stereo belts out a mix of Barnsey, Kings of Leon and Paul Kelly. We hooted our way around 60km down the coast towards Sail City and the water just kept on getting bluer. Its hard to stop grinning at these times, the anticipation of a great day to come is awesome!

Some birds started to appear on the horizon and it wasn’t long before we saw Mack Tuna busting up on the surface. I quickly tied a small slug onto my spin stick and the first cast landed amongst a frenzy of fish and bird. A few cranks was all it took and one of these rockets started peeling line off my reel. We could have caught tuna all day but once we had one in the esky it was time to bottom bash us a feed while we waited for the weather to calm down to allow for serious trolling.

Well the reef fish were thick and they were big! Every drop was yielding solid golden snapper, tricky emperor or cod – all tasty fish. After a while I felt like experimenting and tied on a big soft plastic with a 1oz jig head. We were in 20m of water and the bloody thing was getting crunched before it even got to the bottom! Interestingly, the species mix for the plastic was totally different to bait and I landed three coral trout on three casts and then a couple of blue bone wrasse – even more tasty!

We had to stop bottom fishing after about an hour because we had enough fish. Barotrauma (kinda like the bends for fish) makes catch and release a waste of time in water deeper than 10m up here. Past that depth most reef species just can’t handle the sudden pressure change and don’t recover. The beauty with the billfish hotspots off Darwin like Sail City is that the relatively shallow water allows you to bottom bash for reefies and troll for pelagics in the same areas.

The east coast pelagic fishery (and correct me if I’m wrong guys) is more likely to see you in water between 100 and 1000m deep. You need the big bucks to bottom bash these areas with the aid of a very pricey electric reel. With the range of options up here there is no excuse not to change target species to minimise your impact on fish stocks. So we left them biting and went and had a chat with some blokes in the only other boat on the water. I don’t usually go near other boats but we were so far offshore that land was only a sliver on the horizon. In this scenario it’s reassuring to have other boats around. These guys were drifting live baits under balloons for Spanish Mackerel and hadn’t caught a fish in over 2 hrs. We set em straight and told them to drop a bait to the bottom and hold on! 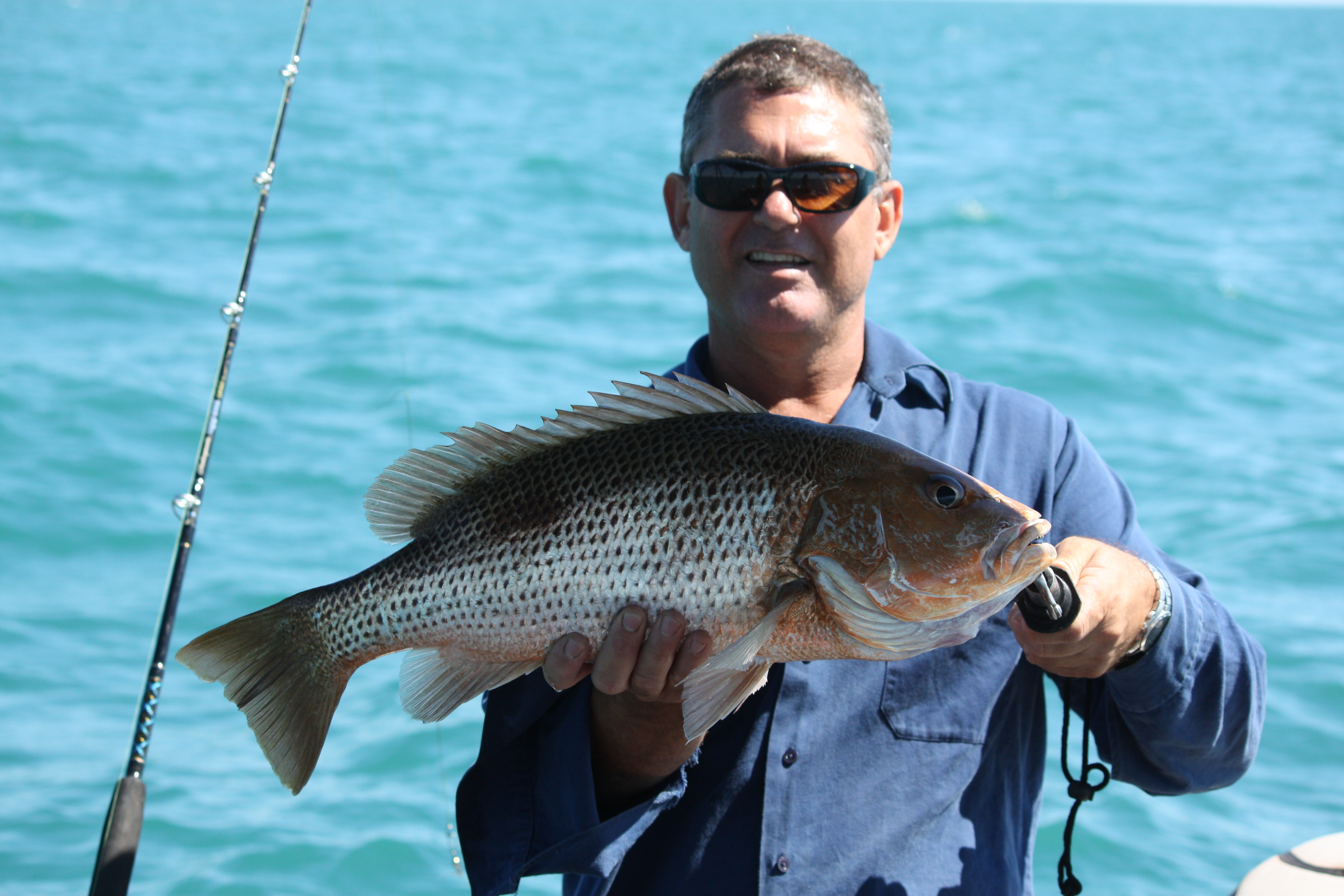 What we did next would have upset them for sure. After wishing the lads good luck we started to slowly motor away to set up a troll run. Moff threw out a shallow diver while I set up the teaser. We had literally only travelled 10m when Moff’s rod was buckling under the weight of something massive. Whatever it was, he must have dropped the lure right in front of its nose! We were hooting and the lads in the other boat would have been shaking their heads. We were just having one of those days where everything goes right. Well, except for the next bit.

After 15mins (or was that an hour Moff?) the battle between man and fish was going the way of the fish. Moff was swearing like a trooper and at one point he couldn’t see due to a blinding suncream/sweat mix in the eyes. I was telling him to harden up and other such encouraging words while trying not to mention the fact that this fish was actually dragging the boat around behind it.

Something had to break. I was worried it would be Moff but his rod beat him to it. It sounded like a gun going off as the fibreglass shattered into the air and sliced through the 80lb braid. I could only watch as the severed line disappeared down to the depths. We will never know what that was but I’m speculating towards either a marlin or a manta ray. Both are relatively common in the area but I’ve caught neither so can’t really be sure. It was a credit to Moff how he handled that one. I woulda been spewing. He just sat back, cracked a beer and told me I better get a lure in the water!

I tied my big deep diving x-rap onto my heavy 37kg outfit. This set up wasn’t appropriate for sailfish but I was keen to try it knowing that a mate Trevor had won the billfish comp down here with the capture of a fat Black Marlin on the same lure just a week before. Well as luck would have it, we only got about 50m before it was hit. This time it was a little overzealous Mack Tuna which was quickly released. The lure goes out again and we got another hundred meters when wack, my rod nearly gets bounced out of the rod holder as a Spaniard takes a swipe. No hook up this time. We do a loop and as we go back over the spot I get a solid hit that holds. This time it defiantly isn’t a tuna and some fast runs have me calling it as a Spaniard. Sure enough, 10kg of mirror flanked, razor toothed missile comes to the surface and I’m cheering to have landed my first ever Spanish Mackerel.

So our visit to sail city yielded some hot fishing, epic battles and a new friendship. I can’t wait for the chance to get back out there for a rematch with that beast from the deep. Geez I love fishing!!