Have you ever watched a fishing DVD, youtube video or read in a magazine about the latest, greatest lure to hit the market.  The one that apparently caught so many fish that you just had to buy it?

Welcome to the world of vibes!

Never heard of a vibe?  Well until recently, me neither.  Then I bought 3 …

‘Vibes’ is a name to describe these relatively small metal lures that vibrate insanely fast when you lift or wind them through the water.  They are fitted with two small trebles and often have 3 or more holes on the top so you can adjust the ‘tow point’ and the speed at which they vibrate.

From what I had seen (on videos), and one brief session with Lee, I knew that vibes were capable of catching flathead and bream.  But the question remained: why buy one of these crazy looking things (which can rust if your not very careful) instead of a couple of packets of plastics for the same price?

To test this, I did what you should do when trying any new toy or piece of gear.  Tie it on, use it all day and don’t revert to your favourite plastic, lure or bait when the going gets tough! 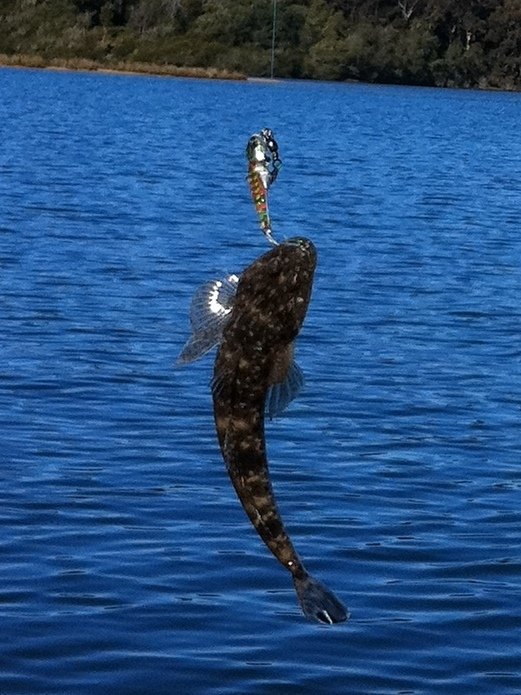 I launched the hobie kayak, switched on the sounder and went vibin’! The technique employed was the flathead staple of ‘lift-and-drop’.  Note: vibes don’t vibrate on the drop – like a plastic, they just kind of ‘die’ and spiral down.

Before too long I manage to land my first fish of the day.  It would have only gone 20cm to the tail.  Still, good to get early runs on the board!  The second fish (about an hour later) was much more solid, but after a short fight, threw the hooks 🙁

The next positive hook-up (another hour later) was another tiddler!

The action certainly wasn’t hot, but enough to keep me interested.  It was only when another more solid fish threw the small treble hooks that I started to question what these vibes were all about?

They certainly have fish attracting power! If you are used to soft plastics, the feeling of the vibration from the lure travelling through the braid to your hands is crazy.

They are heavy for their size: This allows you to fish deep holes for species with relatively small mouths like bream or trevally without the need for big lead-headed jigs – (these usually have a hook that can be too big for these species).

They foul easily: On some models, the trebles can get caught on each other, immediately ruining the action (no vibes for you!).  Either treble can also hook on the line with the same result.  Weed quickly interferes with these lures too.

They are very small treble hooks and my experience suggests that they may struggle to really lodge in a larger fish’s mouths, compared to a single hook.

I’m sure if I had landed a flathead or two worthy of the table, this story would be quite different, but until then – the jury (in my mind at least) is still out on Vibes!  Next trip I think I’ll reach for my favourite plastics 🙂

Trolling up a storm – kayak trolling for estuary staples