You’ve gotta love holidays! I’ve just returned from an 11 day epic adventure where fishing took priority over everything. Most sane people wouldn’t consider spending up to five days straight on a boat but my brother Mitch and I were upset when that last boat ramp came around the bend.

I can’t depict the good times in mere words so i’ll rely on the pics and some captions to do the talking. In short, I finally mastered the art of twitching hardbodies for barra, landed my personal best and even scored my first bazza on the fly. It’s not all creeks and barra. To start the trip we teamed up with some mates for a soujourn to an offshore island where turtles come to lay and GT’s cruise the beach – my new happyland!

Plenty of lessons were learnt on this trip and I’ll be pondering a few here and will no doubt expand on others in subsequent ramblings. 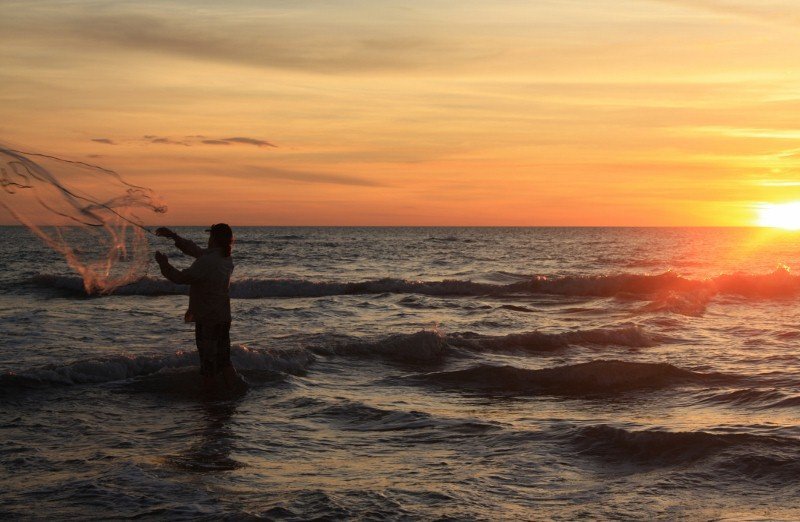 Bare Sand Island: Around an hour’s chug from Bynoe Harbour this island is, as the name suggests, pretty much devoid of vegetation except for a tree and some dune grasses. No vegetation means no mozzies or sandflies – this makes for happy campers! This is Mitch making use of the last light to net some mullet. The bait was sparse on the island and the nearby reefs were quiet so we didn’t spend long enough here. 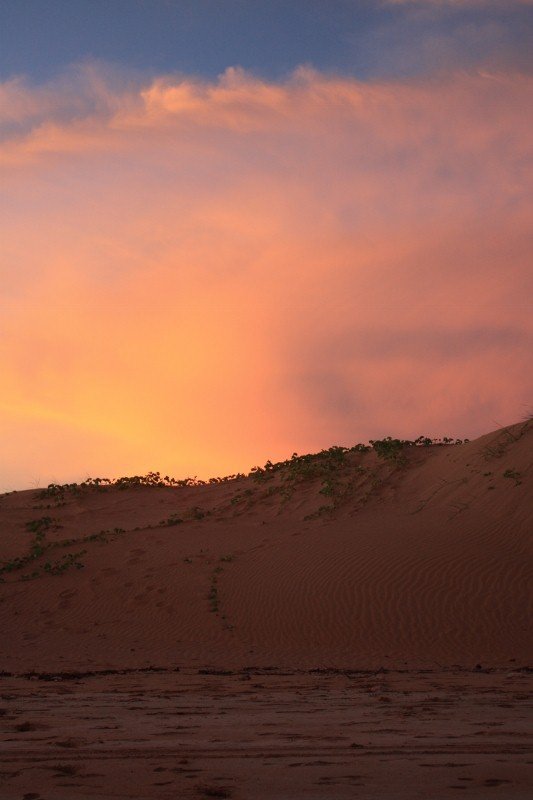 We camped on these dunes to (hopefully) put us out of range of crocs. We did get raided by reptiles that night but they were of the flatback turtle kind. I found the tracks where five had layed eggs during the night. Pity it happened while I was unconcious after a hard days fishing! The clouds in this sunset are significant because it was the last storm of the wet season – and yep we got wet that night… 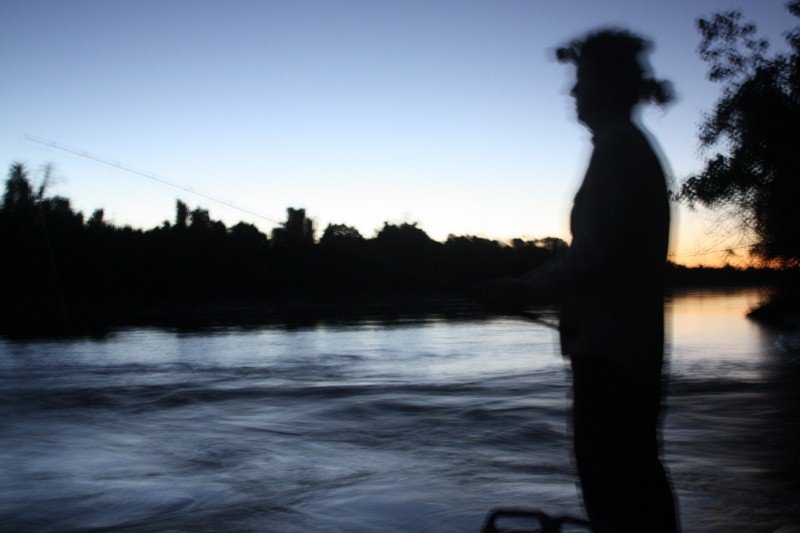 Dawn on the Daly River: With runoff fever raging we packed our wet swags and headed 300kms inland to the Mecca of runoff barra fishing. The road to the Daly had only been open for two days and the launch a tricky one off the river crossing because all the ramps were washed out. We got there in time to head an hour downriver where we found an awesome colour change and a safe spot to moor for the night.

The fizzers came out and after a feed of snags we cast well into the night. This was frustrating fishing. The barra were boofing all around but we couldn’t match what they were eating. I eventually rolled out the swag in defeat.

Early the next morning Mitch was awoken by a splash of water over his face. The splash was from a fish i was struggling to land. I had risen early from a mozzie ravaged sleep to have a quick cast and almost instantly my fizzer was engulfed beside the boat. Mitch didn’t waste any time in netting the silver slapper and I was happy to have landed my first barra on a fizzer. 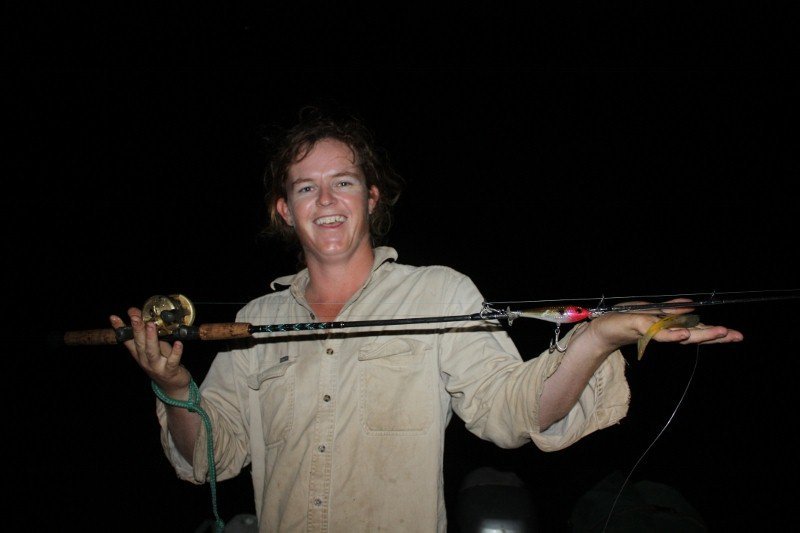 When a calcutta becomes catch of the day: It turns out Mitch was stilll asleep when he attempted his first cast. This nearly ended in disaster. On the backswing he managed to hook his trusty, and expensive, outfit from behind him and flick it overboard into the inky black water on the cast. The surge of floodwater was rushing past but thankfully we were anchored in a backeddy and somehow I managed to snag the rod tip on a heavy soft plastic. We decided that that would probably be the catch of the day. I’m happy to say it wasn’t! 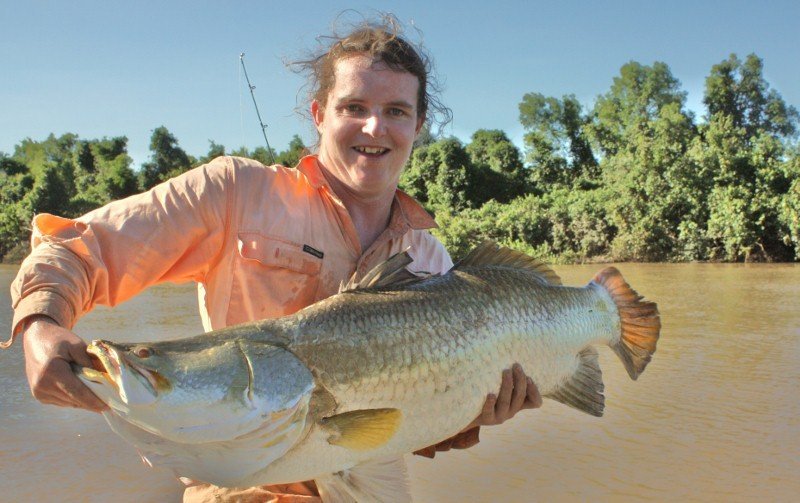 110cm of silver: As you can see, things improved dramatically as we ventured downriver. We were fishing a junction around 60km downstream (yep its a big river) and oversized mullet were cruising the eddys at a lesurely pace. Seeing this i decided to tie on a large shallow diving hardbody lure and attempt a slow, slow retrieve. Not only does this approach give your hands a rest from the twitching but also a moment to contemplate the landscape. I eventually landed a cast dangerously close to a snag about 30m away when my slowly rolling lure was crunched by a bucket mouth in a explosion of spray.

My meditative state was shattered as I stuggled to get control of the thrashing horse of a fish. The adrenaline pumps and parts of the fight are a blur. Eventually I feel like i’m making progress when the big girl launches from the water and arcs her silver flanks at least six feet out of the water. She comes crashing down and the water boils. Somehow my lure has stayed in one peice and that peice is still connected to the fish. After the dramatic acrobatics she slides up to the boat and we spot a bull shark muzzling her. In a rush Mitch lunges with the net, knocks the shark out of the way and brings my trophy aboard. Great net work Mitch! 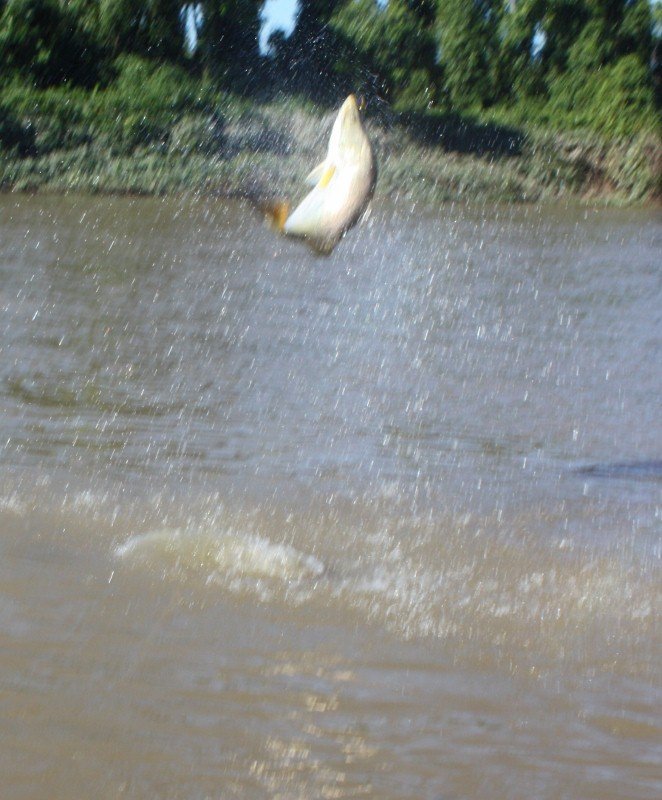 This blurry pic gives you an idea of how high this fish jumped. Awesome to watch! Mitch did well to get this shot cause i was screaming at him to get the net.

I know i was going to stick with captions here but barra this big demand a bit of thought. This girl was probably anywhere between 8-12 years old and like all barra, she would have started out life as a male until she reached around 80-90cm of length. Over the years she would have spawned millions of eggs and, aside from crocs, would have been one of the dominant predator in the system. Every year she would have migrated back into the rivers, cruising up on the high tide, to enjoy the huge volume of smaller fish that are being swept off the wetlands by the receding floodwater.

It isn’t illegal to keep these big breeders in the Northern Territory because barra stocks are looking pretty good. That said, turning up at a boat ramp with one of these in the esky wouldn’t excite many people and it’s likely someone would have a go at you. Most Territorians respect barra and I share this sentiment. Over the break i’ve landed 30 barra and still haven’t bought one home for the BBQ. Weird? Maybe. 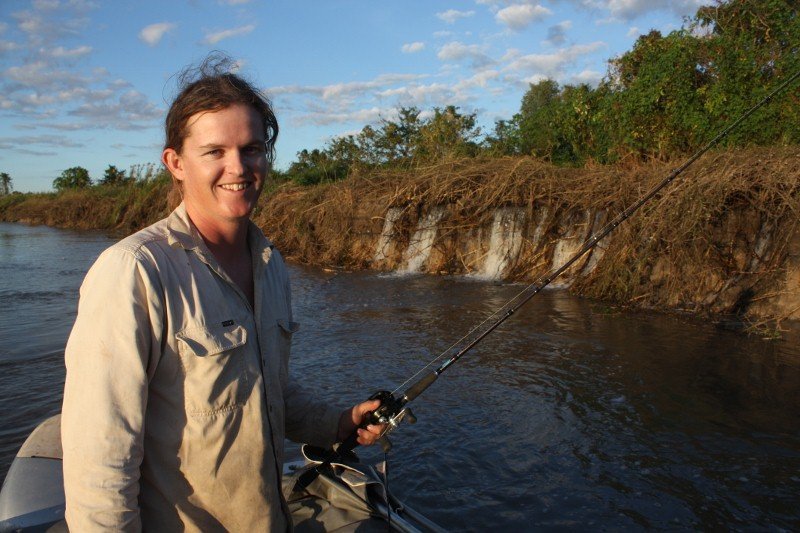 This is what the runoff is all about. Water cascading off the wetland in a series of bait filled waterfalls. Big fish were cruising this edge but were hard to tempt with so much real food around. 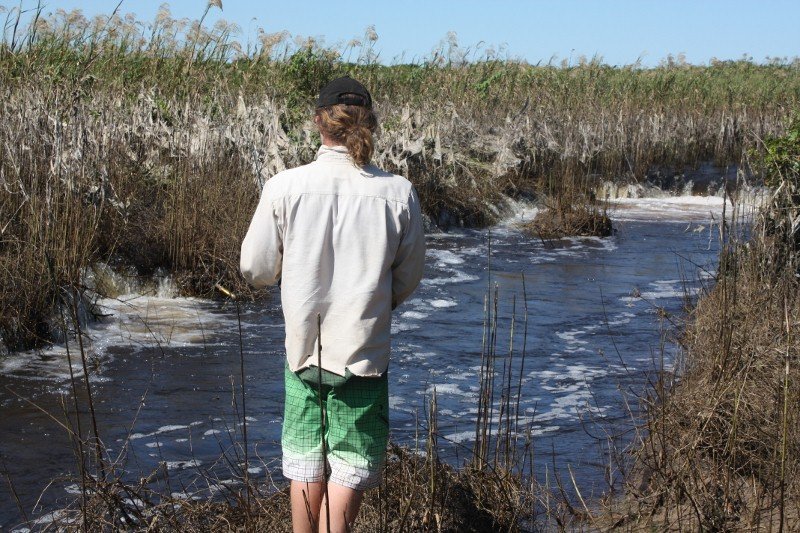 Another runoff shot. To get here we pushed right up the rapids on the incoming tide. The sound of rushing water makes it hard to talk to each other and you have to be out of there before the tide starts to run out or it gets really hectic. In order to steer a boat you need to be going faster than the flow of water. In a creek 3m wide with crocs on the banks you don’t have much room for error! 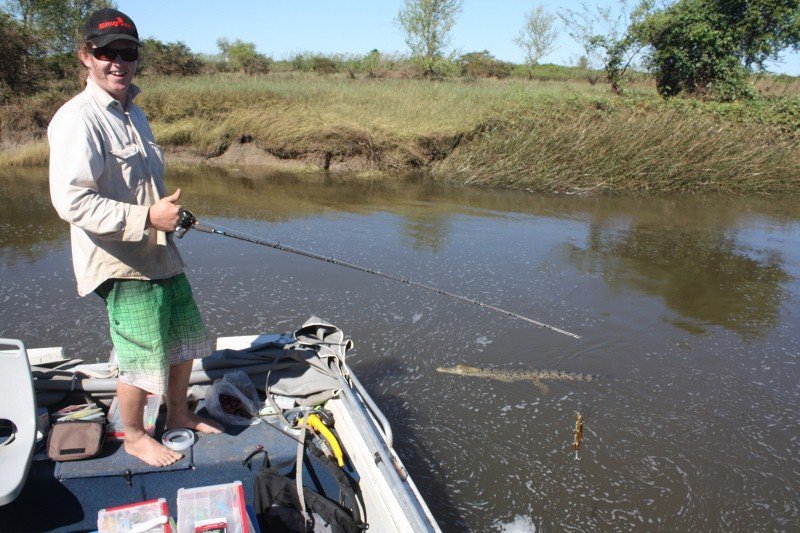 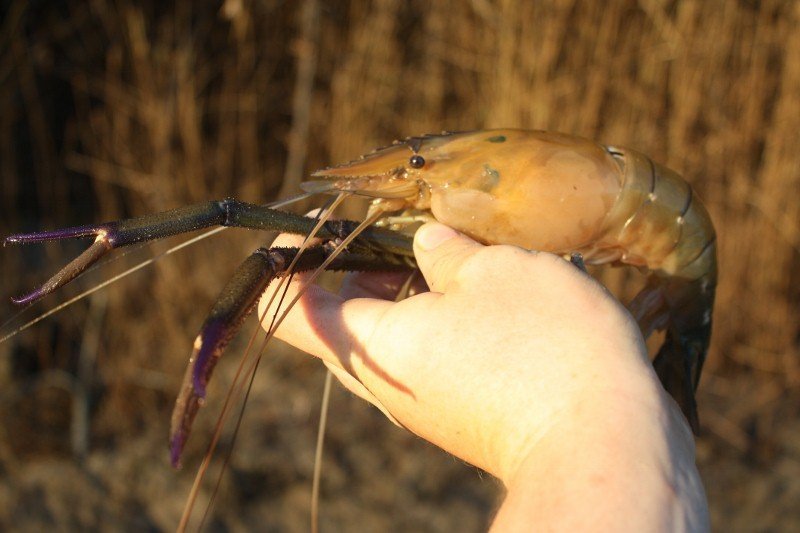 The Daly River has lots of big Cherabin, a freshwater shrimp. This one became breakfast on the water. Tough times! I’m told it is impossible to breed Cherabin in captivity. If it wasn’t they would be on xmas lunch menus all over Australia. They are delicious. 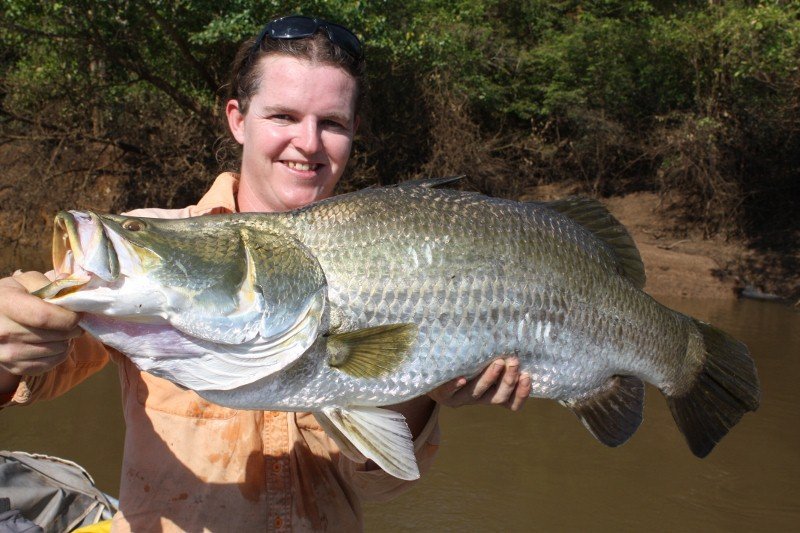 This 87cm model came from a foot of water in front of the tiny drain in the background. We passed many similar drains but noticed a stack of bait trying to flee up this one. We are glad we had a look because it was a great spot to get the fly rod out. 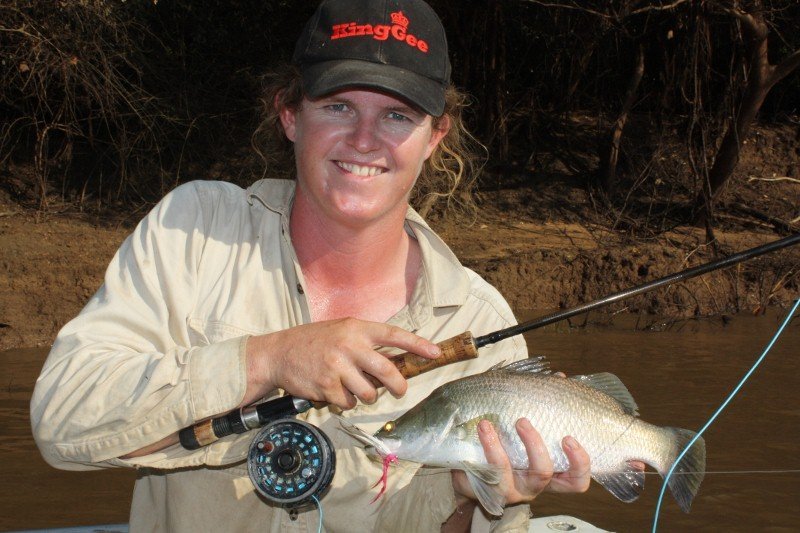 Mitch’s first barra on fly: You worked hard for this one mate! That rod had done alot of kms so we were excited when Mitch finally had a chance to tie on the famous ‘pink thing’ and have a shot at this target. Is wasn’t long before the unnatural looking creation landed in the zone and the little bazzas were jostling to get in first. In a shower of fry, baby catfish and tarpon, this little fella sucked in the fly and took to the air. Afterwards, I managed to wrestle the rod off Mitch for long enough to land my first barra on a fly as well.  It’s always great to pick up a new technique – even if the resulting fish were small. We then took turns to land little barra after little barra until the light told us it was time to speed to the ramp before the mozzies camp out to play their wicked games.

Following our amazing time on the Daly I spent a few days in Kakadu fishing the East and South Alligator rivers with good mate the Nightcrawler. We caught lots of bazzas, had a scary run in with a croc and learnt plenty of lessons that I will talk about in my next post. 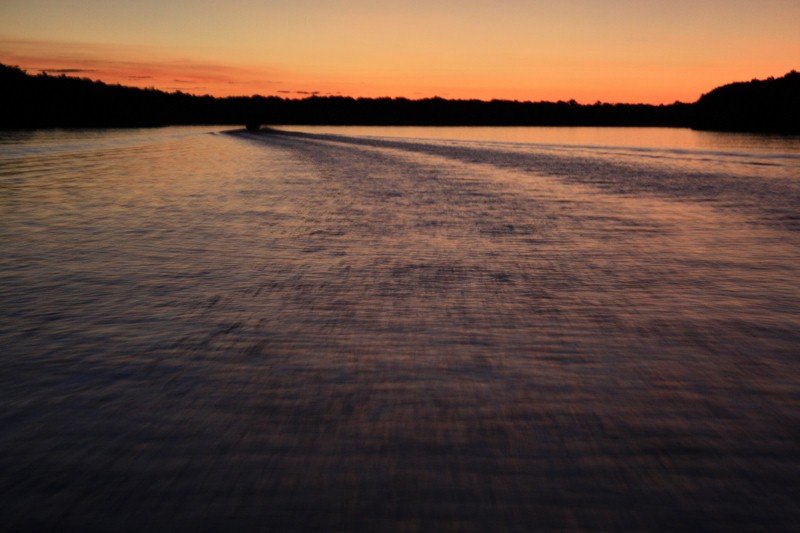 A great sunset for an awesome adventure…

6 thoughts on “Tales from the runoff”